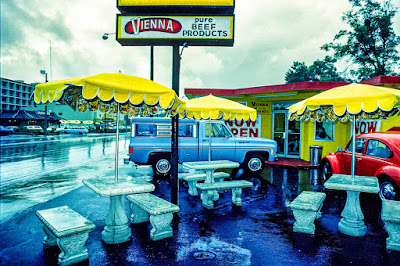 Ili is out of town for a long weekend.  I think of all the things I can and should do, but they become a jumble, and I stagger around, lost, not in a bad way but because it is no longer my norm.  Finally I settle down and do nothing at all.  It is a luxury to sit with my own thoughts.  I need do nothing.

When she returns, I'll be saddened by how little I have done.

I went to a birthday party tonight with people from the factory, a small, pleasant affair in a nice restaurant in another part of town.  It is fun because the group is smart and they fairly tolerate me.  It is nice to be tolerated.  I had to force myself out of the house, though.  I am, by nature, a shut-in.  I have read about people who become afraid of the world outside their home.  I can identify.  I am an only child.  Home was always a sanctuary.  For awhile, though, I let the devil drive, and I learned how to navigate the world "out there."

I am not and have never been good with parties, though.  It is not possible to be omniscient.  When you engage in one conversation, you are missing another, and it is maddening.  In my youth, I would sit outside the party and observe, usually from another room.  Eventually someone would come and sit down to talk, and the party was lost.  I guess you could say that I was a mopey kid.  Now I'm simply a nervous adult.

I left the party early so that I could come home and put on my drawstring pants and just sit.  And think.  And read, from time to time, but the words lead me to ponder.  Images and conversations from the evening pass before me in sudden revelations.

"What will you do?" they ask, and I have no answer.  If I am honest, which I can be, I will tell them that I don't know, that it is sometimes concerning, and even that at night, I often have dark thoughts, but I only admit that to those of a certain age.  Dark thoughts are not for those midstream.  Like the British, I believe in keeping up a good front.  I am an Anglophile in many ways, but especially in the realm of the stiff upper lip.

Except when I whine, but that is mostly in writing and almost always here.  Believe what you will.

They are lovely people, and I will truly miss them.  By and large, they are much younger than I, and I am not sure how much of me they comprehend, but they treat me well and that is more than I could expect.  As long as I don't say too much, I always feel safe in their company.

Now. . . about this picture.  You might not believe this, but even then, I knew that everything was ugly.  The colors, the shapes, the materials.  You could measure them against the past and know.  The seventies were a hideous time visually if you lived in it, but to look back at it is fairly fascinating.  Everything was cheap.  Everything was meretricious.  Really, it is why Eggleston's work is so horribly fascinating.  He knew it, too.