Harry Potter and the Man in a Dress 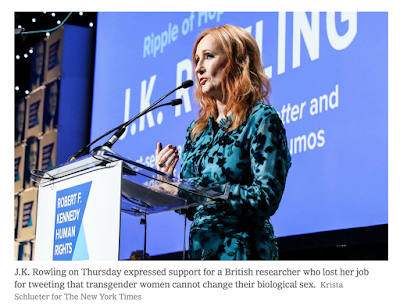 Here are the Cliff's Notes on the article if you don't wish to read the entire thing.

The researcher, Maya Forstater, lost her job last year at a think tank in London and filed a lawsuit earlier this year alleging discrimination based on what she called her “gender critical” views, which she has expressed often on Twitter. Among them is the belief, which Ms. Forstater tweeted on Wednesday, that “it is impossible to change sex.”

An employment tribunal in London ruled against her on Wednesday, saying her views were “not a philosophical belief protected” by British law but were instead “incompatible with human dignity and fundamental rights of others.”

“It is also a slight of hand to suggest that the claimant merely does not hold the belief that trans women are women,” the court ruled. “She positively believes that they are men and will say so whenever she wishes.”

Much of that suspicion has focused on Ms. Rowling’s social media activity. In 2018, she was criticized for liking a tweet that referred to transgender women as “men in dresses.”
Posted by cafe selavy at 8:48 AM