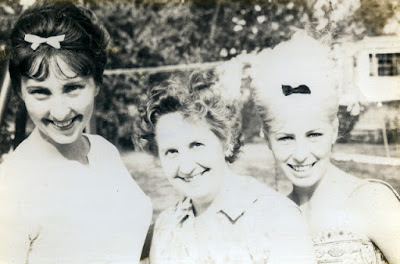 There was a time when Beehives and Bows were a thing, I guess, if you can believe an overexposed, faded Polaroid.  Actually, I remember when it WAS a thing.  Girls would go to the beauty parlor (as they were called then) before school dances or proms and get "fixed up."  It took a lot of hair spray to keep those hives together, I recall, and once they had paid money to look all fancy this way, the girls weren't likely to let it fall apart for awhile, so for the next week, they would be wearing their Beehives at school.  They slept on special pillows so as not to destroy them, then in the morning, they would get up and fix any damage done with more hairspray.

This picture was taken on a family vacation to Ohio where I was born.  That is my mother, my dad's brother's wife, and a girlfriend of her youngest son. 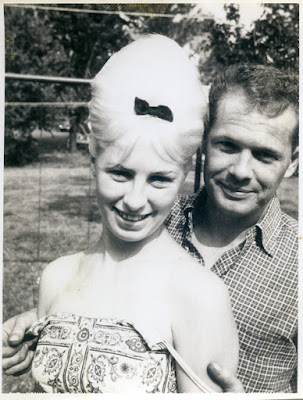 Forest was his name.  As I've said elsewhere, he and his brother's were bona fide criminals.  I'll tell a tale some day of a fight that broke out in my father's house between Forest and Eugene over a crime that sent Forest to prison for a spell.  Reportedly, Eugene stayed friends with the Rat.  I'm beginning to remember now that this woman did become Forest's wife, but I wouldn't be able to swear to that.

Dottie, their mother, used to say about her family that even the dog was a thief.  He would bring home stuff from the neighbors' yards whenever he got the chance.

We moved from Ohio when I was almost five, so I didn't grow up around this clan, but on the occasional visits with them when I was young, I was fascinated by their terrible tales always told with much foul language and humor.  That is where I learned both.  To all appearances, they had no concern for social mores.  If there was ever a line, they would step over it--and laugh.  I learned just enough from them to be irreverent but fortunately not enough to really get into real trouble.
Posted by cafe selavy at 8:41 AM