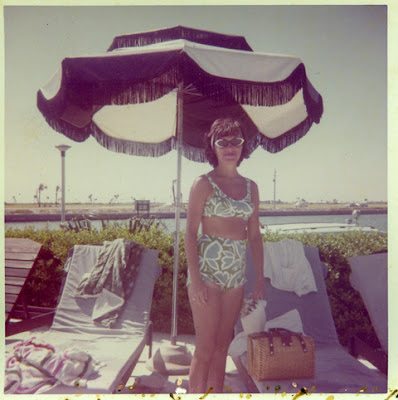 I know where this picture was taken, but I don't know who is in it.  I was about ten when it was taken, and we had gone to Clearwater for a company outing.  It was my mother's group with whom she worked at a big defense contractor.  More about them sometime.  The outing was held at the Guy Lombardo resort.  You might know who that was, so here is a link to one of his songs (link).  I've always mixed him up with Von Monroe, so don't feel bad about not knowing.  Oh. . . you don't know Von Monroe?

Clearwater and St. Petersburg both exist because of dredging.  You can see the new land in the background of the photo.  I will show more photos of this magnificent resort, though, and you might see that it was really spectacular for a hillbilly kid in his pre-teens.

But let's focus on the woman.  I asked my mother who she was the other night, and she had no idea.  Maybe she was the wife of somebody my mother worked with.  But who took the picture?  I'll bet it wasn't my mother.  Good old pop.  He never took a photo that good of me.

I find the woman stylish in that early 1960s way, something right out of "Madmen."  I like the patterned suit, though not the color.  But look at that handbag and those sunglasses!  The woman knew a thing or two.

You can stop reading at this point if you don't want to hear me whine.  My life right now is really shit.  I had to leave a room today at the factory so as not to have a tearful breakdown.  Now this is real pussy shit, I know, but I can't get control of my emotions.  That's a healthy admission, right? I am seriously considering something other than whiskey for a therapist.  I may begin taking applications for a caretaker soon.  I need some psychic energy and emotional relief.  I'll be fine, I'm sure.  It's just that I am not the man I used to be.