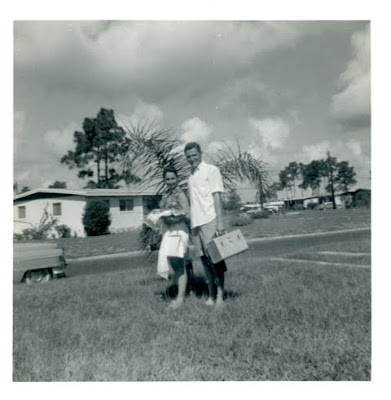 My father had itchy feet and wanted to travel.  He'd been in the navy in WWII and had seen some things you don't see at home on an Ohio farm.  I guess he figured there was more, so when I was a wee tot of four, he quit his job, bought a one wheeled trailer and a bunch of army surplus camping tents and sleeping bags and Coleman lanterns and stoves, and he took my mother and me on a trip across pre-Interstate America.

When we came back three months later, he had pictures and movies to thrill the yokels and tales beyond the holler's collective imagination.

And then he went back to work.  By the next year, however, he was ready to go again.  A fellow he worked with, named Frank, wanted to come along, too, and my father said sure, why not, so Frank got his girlfriend and loaded up the Edsel.  It was 1958, I believe, and not so many men were traveling across the country with their girlfriends.  It was a bit different trip this time, I take it, with more motels and less camping, but I was young and my memories are vague.

After that trip, the Little Miami River flooded our basement and ruined our summer's harvest of canned goods and meats in the deep freeze, and my father was ready to bolt.  We moved to Florida.

This is a photo of Frank and Gladys when they came to visit us.  I wish I knew more about Frank and Gladys.  I don't know if they ever got married.  But look at them.  They were Dayton, Ohio Bohemians ready to take an adventure, a handsome young couple.

I think this was the last time we saw them.
Posted by cafe selavy at 8:29 AM