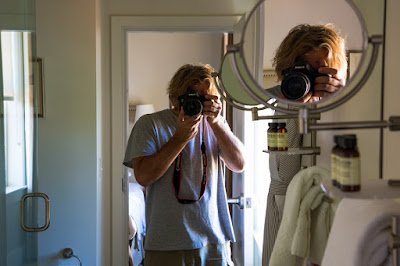 I wrote a long, desultory post last night that I planned on posting today.  But I have changed my mind.  Much has changed since then.  I was weepy all day yesterday.  I would break down in convulsive sobs at little memories.  Then I drank too much and fell asleep on the couch.  When I woke up, I took a Xanax and went to bed.

This morning, I woke to several texts that startled me.  One was from Ili.  It was a jumbled thing that I couldn't quite grasp the purpose of sent late last night.  I have written often in my mind to her, but prudence prevailed, and I never wrote one actually.  I am not really the sort.  But I felt that I should respond to hers.  We have not spoken in over a month, not since the day she left.  My first response was to parse her text and correct all the faulty assumptions she put forth, but I deleted that one and wrote another that spoke only to my feelings in the gentlest and most conciliatory way.  When I finished, I thought it was well done.  I hit the return button and away it went.

Holy smokes.  The torrent I got in return was shocking.  No, really.  I was floored.  Let me say gently that my sentiments were not returned in kind.

Yesterday, I checked my work schedule, and I found that there is a meeting of administrators late in the afternoon--off campus at a bar close to the factory.  No, no. . . we never do this.  Of course, my worst fears were being confirmed.  Then this morning, my secretary wrote to tell me she wouldn't be in until after lunch.  Later, one of the people I supervise wrote asking me if I were going to wear my party dress.  Fuck, fuck, fuck!  I have told everyone I DO NOT WANT a farewell party.  There are many reasons for this, mostly selfish.  They are usually paltry things where you have to shake hands and talk to people to whom you are vaguely connected, and you obsess over who did not show up.  I do not like obligatory celebrations of any kind.

And. . . I know I will sob like a baby which I DO NOT want to do.  You see, they think I'm a cool, dangerous fellow.  But I'm afraid I won't be able to control myself.

HOWEVER, Ili's torrent this morning may help staunch all that.  Maybe she will have hardened my heart a bit.

I keep thinking about Henry the yardman, though.  He had never shown up again, and it makes me very sad.

And the cat has disappeared.  She didn't come for breakfast yesterday or for dinner last night.  She didn't show up this morning.  She has either been eaten by a coyote or she has been caught in a trap.

There is just too much loss.

I tried hard to pull myself out of my funk yesterday.  I took my camera out, went to the big city downtown, looked around.  Man, the streets were dead.  Everywhere.  Everything looked ugly to me anyway like things looked in the 1970s.  We are living in bad times that may be getting worse.  Trump's unnatural color and the way he wears his bangs are surely only to mask the Mark of the Beast.  These have to be End Times.

But I stray.  The photograph I post today was the best of the lot.  Pathetic.  I am pathetic.

I have three more days at the factory, then they pull the plug, and my days will be filled with some horrible existential void.  I feel like I'm stepping into an empty elevator shaft.  I can only hope that, as the song goes, falling might feel like flying.

For a little while.