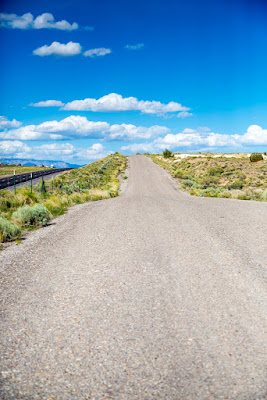 Emblematic. Anyone can take the photo and many have.  It is just a road.  But. . . you know. . . metaphoricity and all that.  Didn't the genius Cormac McCarthy write a novel with that title?  I tried to read it.  I read everything else he wrote, but I couldn't finish that.  And, of course, it became his best seller, I think.

No it didn't.  I just looked it up.  His best, "Blood Meridian" is his best seller.  Now THAT is difficult to believe.  I mean, man, that book is complex.

I think I will re-read it this week, for these are apocryphal times.

My life is less so.  I have good days and bad ones, but I have not really good ones.  I bought an atlas of the U.S. and am looking at places to go.  I choose the ones that scare me.  Back roads of Georgia, etc.  I might just as well end up on one hundred miles of bad Georgia highway as anywhere else, I guess.  It might be the closest thing to an afterlife that I am likely to find.

I spent a lot of the day with my mother.  I took back some presents from Christmas that she did not want, and she went with me.  Later, I made little red beans and pork and rice and had her to dinner.  She is my champion.

In between, I went to Home Goods and bought some things that Ili took with her when she left.  It felt good.  Later, I took down her pictures that littered the house.

Now, alone on a Sunday evening, I sort of watch football.  I am not as interested as I was last week, and I come and go checking the score and the highlights.  In between, I sit out under the clouds and smoke a cigar and drink some whiskey and talk to the cat the comes around often now when I sit outside.  I've decided to change her name since Ili left.  I hated the name we gave her.  She doesn't know her name anyway.

As I sit and smoke and drink, I think about the outdoors and adventure.  I have been housebound, by and large, for over a year.  I have travelled, but it has not been outdoor adventure travel.  I have not slept out under the stars.  I am a wreck physically, but I think I can sleep outside as well as anywhere now.  I could sleep on a sailboat or I could sleep in a tent.  I think.  But the first step is to get out the door.  I am trying to get out the door.

I am about to take a 40% reduction in income.  There will probably be no more Breakers or Four Seasons for me.  The Wagon Wheel is more likely, though there are fewer of those than there used to be.  I am thinking of driving two hours north to my old Alma Mater and traveling some old roads from there.  Even that, two or four hours from home alone seems challenging just now.  But it will be fine.  It is psychological at this point.  Once I get on the road, it will all be fine.

If the old car doesn't break down.

Tomorrow is a holiday, MLK day.  I am thinking of getting out of my zip code for part of the day, just an hour away, just to make some photographs.