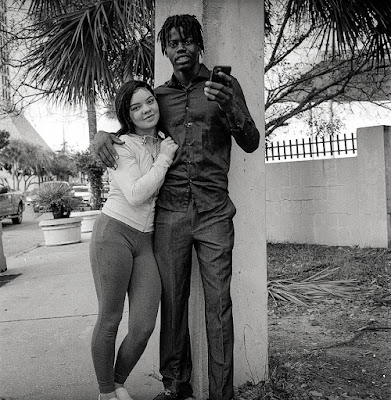 Here's the picture I took on my first outing with the gifted Rollieflex.  You remember my story about the couple.  I took the photo, did not have my phone, she had a pen, I had a $20 bill, he wrote his phone number on it so I could text him the photo, I promised I would. . . .

Yesterday was a slow, busy day.  I think that is what retirement is all about.  I'll quit talking about retirement soon.  It is just so NEW to me, the experience so powerful, that I am in a constant state of amazement.  But I promise, I will soon move on to other things.

Early on, I called AARP United with my new insurance plan F to get some info on my free gym memberships.  The fellow on the telephone was very nice and chatty as he set my account up.  When it was all done, he asked me, "Do you have a pen and paper handy?"

"Yes," I said, and wrote down the letters and numbers he gave me."

"You asked me if I had a pen and paper.  I could just type it into my phone like any kid would do."

He laughed at that, so I decided to tell him my so-far-favorite retired joke.

"You've probably heard them all, " I said.  "Have you heard how many retirees it takes to screw in a lightbulb?"

Oh, I'm going to be a real hoot at the Boca del Vista retiree nights.

Then I got my free gym membership at the Y.  Saving over $600/year there, and I can set up as many gym memberships as I want.  I'll head to some of the big fancy ones today where the steroid boys can get irritated at me for using the equipment.  It's one of the new pleasures I've found.

Home for a shower and lunch and wine, then a trip to the photo store to get some chemicals.  As usual, they chat me up.  But I had to cut it short, for I had an appointment at the factory.

More money savings, dude.  They needed a copy of my new Medicare card so that my pension can start paying me $150/month toward the cost of my supplemental health insurance.  Now you may wonder, "Couldn't you just email/text it to them?  Are you really such a boomer?"  And the answer is, yes I could have, but. . . there was something I wanted to borrow from the factory for awhile, and I needed to pick it up in person.  So after the photo store, I hopped on our horrible interstate hoping to get to the factory quickly.  Of course, 3/4ths of the way there, traffic was stopped, backed up for miles and miles, so I arrived much later than I had planned.  And, of course, people chatted me up.

It was three when I left, and I had told my mother I would come over to make a Costco run with her and my cousin and have dinner with them, too.  I decided it was too late to run home, so I just went directly there.

And when I got to my mother's house, there was the obligatory sitting around as they chatted me up.  After an hour of that, I asked if we could go get the goods.  With much deliberation, we loaded into my cousins car, and we were off.

Costco is for explorers, I feel.  There is always something new to be discovered.  As we made our way through the isles of the disenfranchised, we stopped to spy some new, exotic offering.  My mother and cousin were busy eating their way through the place, stopping at every cart offering a taste of this or a taste of that out of little paper cups.  The disenfranchised bunched up on these oasis just to get a taste.  By the time we got to the check out counter, I doubted that my mother would be in any hurry for dinner.

And this, comrades, is where the story turns back to its beginning, a snake taking its tail into its own mouth.  We each lined up at the register to pay for our spoils in turn.  My mother, having the least, went first.  I followed her, but the checkout dame looked perplexed.  She wanted my non-existent Costco membership card. No, I explained, this is on her's, pointing to my mother.  The lady looked like she was doing some internal calculus equation that she couldn't quite solve.  Her eyes turned inward, her jaw went slack.

"What are you trying to figure out?" I asked her.

She said she couldn't let me pay with my debit card.  Flustered, she call a manager.  My mother, a hillbilly not to be trifled with, began to explain in frustrated tones that I was with her, that we had done this many times before.  Costco people in those red vests began to gather around the register as the store patrons looked over at the miscreants who required official attention.  I said nothing.  I know what it is like to make your case to morons.  I just let them do what they were going to do without my help.  My mother was "helping" enough.  Finally it was decided that I could pay with cash.  Unbelievably, I had enough money in my wallet to cover the $96 bill (mostly wine), and I counted out five twenties and handed them to the cashier.

That's right.  You guessed it.  When I got outside, I had a realization and panicked, looked into my wallet at the remaining twenty.  Nope.  No phone number there.  Shit, piss, fuck, Jesus Christ, fuck.

I told my mother and cousin what I had done.  My cousin suggested we go back in and tell the lady at the register what happened and exchange twenties with her.  There was no way that was going to work, I said.  After what had already occurred, this would look like some sort of con.  The moron at the register was likely to call the cops.  Nope.  It was done.  I was crestfallen.

I've been brooding about it since.  I told the kid. . . I PROMISED. . . that I would send him the picture.  Now he'll think I'm just another asshole honkie.  Bad juju.  I want to get him the photo.

If you recognize him, give me his contact info, woncha?  It's not a great photograph, but the kids would probably get a kick out of it.

I was right about dinner.  I didn't leave my mother's house until after eight.  I was a little drunk and very exhausted.

Today will be another slow busy day.  The lady from Charles Schwab called to tell me the money from the state had landed in my account and that we needed to meet to decide where it should go.  I have been reading up on investments lately.  I found out that I should have been saving money my entire working life, even if it was only 10% of my earnings.  I would have much more money now, I am informed.  Huh.  I wish I'd known.

I've also learned that indexed stock accounts outperform every other type of account over a period of years.  That is good enough for me.  I am going with that.  I think.  The Schwab lady will probably tell me things I do not know.

But I will exercise first and go to the fancy gym to get my free membership.  And I have a glass plate negative to develop and some large format film, too.  I want to try shooting and developing some paper negatives today as well.  It is fun to have the time for all of that.

There is a big art festival in Coconut Grove this weekend, and I am thinking about driving down.  I'll take my Rollies and make some pictures.  That is what I think, anyway.  It is still to be determined.  One of the best bookstores in the country is down there, in Coral Gables (Books and Books), and it is just a block from the Leica store.  Oh, I should go.  I need to get some air under my wings, as they say.

When I decide, you shall be the first to know.

The sun is almost up and the feral cat has pressed her face against the bottom pane of the kitchen door.  She is staring at me.  She wants food, but not just food.  She likes for me to hang around and talk to her while she eats.  We are buds like that, now.