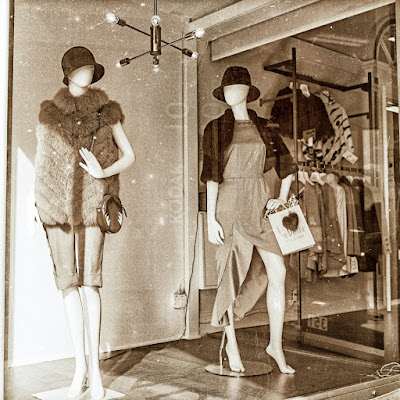 Man, I don't know what went wrong with this film.  It was new.  Maybe.  I think.  This isn't even from the roll that was hard to crank.  You can see the Kodak 10 print from the paper backing, I guess.  I can't figure this one out. 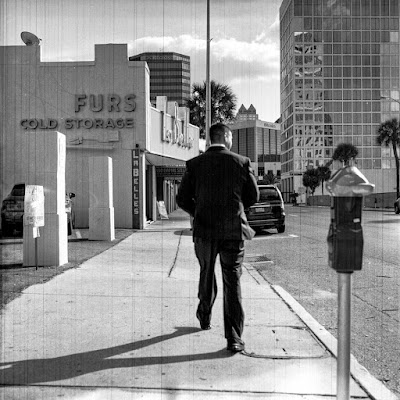 This one is from the other roll, the one that wouldn't advance.  You can see the scratch lines running from top to bottom through the picture.  Both pictures are of the La Belle furrier building.  Holy shit! I just went to their website.  They are celebrating one hundred years of business.  Been here since 1920!  It is wild to think, a 100 year old furrier in the sub-tropics.

I am worried.  I hope I haven't broken the camera.

I was a slug today.  I didn't feel 100% when I got up, and so I spent most of the morning scanning and failing.  Then I did some internet searches for solutions.  A rabbit hole.  I am now considering buying a $450 scanning software and a $150 target slide for calibrating it. That is the price of a pretty good used digital camera.  I downloaded the trial version, and it is a pip, I think.  But I don't know that I would ever scan enough to get my money's worth out of that.  I can work around it, but once you focus on a thing. . . .

In the early afternoon, I was trying an experiment where I would make a color photograph out of a black and white one.  After many attempts, I failed.  I'm not sure why yet, but I will keep thinking and working at it.  I have some pretty high hopes.

By lunch time, I had not eaten, but I felt I needed to go to the track and try to run.  I got dressed, stepped outside, and changed my mind.  Then again.  I went.  It was awful, but I did the deal and it was done.

I ate lunch before I showered.

After a quick nap, I went back to my internet research.  At four, I decided to get a cup of cappuccino. I am at the hipster haven listening to alt.metro music now.  The only words I've spoken to anyone today have been, "I'll have a cappuccino.  Thanks."

But I talked to the cat for a bit at lunch.  She put on quite a show of rolling around on her back with her legs in the air, the flirt.  Funny what a little tuna juice will do.

I looked into rooms in Miami this weekend.  I don't know.  I could buy the software for what I would pay for a couple nights there.  Everything is an economic decision now.

And so, I've done absolutely nothing productive today and nothing that I intended to do.  I have to get better at this.  Much better.
Posted by cafe selavy at 7:15 AM