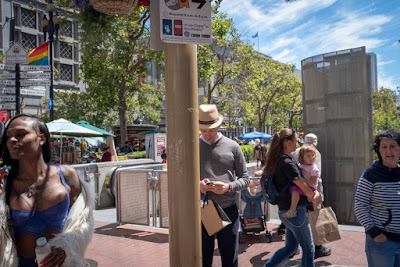 After losing his teaching job, Lizard went back to working as a bouncer, and he got a job in a topless dive.  It wasn't a fancy place; rather, it was one of those little block buildings on the side of a busy highway surrounded by dirt and parking lot, the kind of place you hesitate to go if you have anything to lose.

New, stricter morality rules were being enforced in the county at the time, and lap dances were banned.  There could be no touching the girls.  Lizard was there to make sure that the girls were safe.  One night a fellow, drunk and obnoxious, kept reaching up on the stage, so Lizard told him he needed to leave.  Lizard said that he made a mistake, though.  Usually, he said, he'd take hold of the fellow and throw him out, but for some reason he just followed this guy until they got to the door.  That's when the fellow turned and hit Lizard in the face.  Lizard said he felt his eye pop and he could taste the blood in the back of his throat.  The guy was wearing a big class ring, and it had caught Lizard's eyeball.  Lizard said that he beat the fellow almost to death in rage.  Both he and his victim were taken to the hospital.

He could never really see out of that eye again.  He said he saw light and shadows, but there were no specific images.

Lizard was a mess of accidents, though.  As his deadlifting technique evolved, he widened his stance more and more so that he didn't have to raise the bar as high off the floor.  One day, though, during an attempted lift, he had to drop the bar.  This wasn't unusual, but because his feet were spread so wide, the weights caught his little toe inside his thin, leather lifting shoes.

He lost the toe.

On another day, while squatting something heavy, he went to put the bar back on the machine shop metal rack that had been in the gym from time in memoriam.  But his hands were too wide on the bar and his little finger got caught between the metal pin and the bar holding hundreds of pounds.  The tip of his finger was severed.  Remarkably, Lizard quickly reached down and popped the fingertip into his mouth.  The hospital was only a couple blocks from the gym, and one of the fellows drove him right there.

They were not, however, able to reattach the finger.

Lizard kept it preserved in a jar of formaldehyde.  He kept it in his gym bag to show everyone.

I have to confess, I was impressed by the way he handled things.  He was Germanic and a Neo-Nazi gun collector.  He craved order.  He did things by the clock and by the calendar.  Most of all, he believed in white supremacy.  He would have made a good Hitler Youth.

Those traits made Lizard a consummate researcher and archivist, and he turned his attention more and more toward genealogy.  He did what research he could in libraries and data bases in town, but he eventually began making trips to Alabama, his ancestral home.  There he went through birth records and hospital records and obituaries keeping detailed documentation in his notebooks.  What he was finding through his research, however, was beginning to piss his family off--at least some of them.  He began to see that there was a lot of fuzzy recording of certain birth reports.  What he came to realize was that names were often left off if the child might have been considered a mulatto by the reporting.  He found that there were a lot of fuzzy recording in his family archives.  He went back to Alabama often, and his research grew.  He began visiting black families whose names were recorded in some of the state's documents, and he found that many of them were cousins.  And while his white relatives were not pleased by his findings, his new black family was delighted.  They welcomed him to their family and it was they he went to visit and stay with on subsequent trips.

He turned and looked in the mirror.

"You know," he said, "There is a barbecue truck I stop at on my way home sometimes.  It is run by a black man.  The other night I told him that I was a quarter black and he gave me a lot more barbecue than he used to.  My brother."

One day, Lizard was contacted by a priest who had learned of his research.  The priest had been doing similar genealogical studies throughout the south showing the amount of miscegenation that took place and how it was often scrubbed from the records.  He wanted to see Lizard's research and invited him to come to Philadelphia to visit and to stay at the rectory.

Lizard was full of tales and full of himself when her returned.  He couldn't believe the opulence in which the priests lived.

"We all sat down to dinner at a long table.  There was steak and chicken and wine all served by waiters.  After dinner, we sat in leather chairs and smoked cigars while the servants cleaned up.  There were after dinner drinks. . . . "

He went on.  Lizard knew he had missed his calling.  But his past record prevented him from ever becoming  a priest.  Still, Lizard was changed by the experience.  The scholar/priest had praised his research and encouraged him to continue.  He would.  But he needed to make some money.

He thought he had a way.
Posted by cafe selavy at 8:55 AM