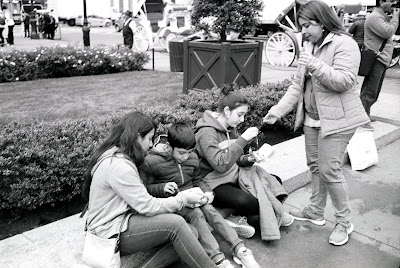 This ain't no April Fool's joke.  Shit is getting real.  Lockdown seemed to many like a staycation at first.  People were out walking and riding bikes.  They were smiling and saying hello and laughing about the distance they kept from you.  I don't see as much jolliness now.  Last night President Trump and his advisory committee, Fox News,  admitted some of the reality of the pandemic.  He's been on top of it the whole time, he said.  He just didn't want anyone to know it.  But he has kept us safe and is keeping us safe.  People didn't know how bad this was going to be.  Nobody knew.

It's going to be bad.

No more Bravo t.v.?  Will the Kardashians do a stay in place series?  Can Paris make another sex tape?

I am fairly certain I had Covid-19, but I will never know.  My symptoms were akin to the Hanks' and to Coumo's.  It was not pleasant.  You don't want it.  I am happy that the symptoms which lasted for two weeks are gone.  But still, this continued hanging around the house alone is getting to me.

I haven't been to the grocery store yet.  I order all my food online.  But I need to get some fresh vegetables and I'm not wanting to let a remote shopper pick them out.  Should I take a chance and go?  Some people were finding my reluctance silly, but each day the number of infected people grows.  Sitting alone in the house, making the decision is difficult.  What if I didn't have Covid-19?  What if I am still vulnerable to it.

I tried to buy Emergen-C online yesterday.  A pack of 30 that normally sells for $12 was $35 on Amazon.  And that was the cheapest I saw.  Some resellers are asking more.

Q sent me the opening lines to "The Waste Land" this morning.  You know.  April is the cruelest month.  It will be this year if the estimates of deaths in the U.S. is anything close to reality.  So far, most people don't know anyone who has had the virus.  They may have heard of someone, but it probably isn't someone in their immediate circle. That is likely to change.

What happens this summer?  Do we all go on vacation?  Do we sit in coffee shops and cafes and little diners again?  Do we go to concerts and ballparks?  Do we do all that and then shut down in September?  What will the world be like at Christmas?  Will we want to watch movies and reminisce about what life once was?

I believe that mass madness is in the offing.  We are a social species.  Social distancing is not really in  our DNA.  Borders closed, jingoism is bound to rise.  Economies failing, there is bound to be more nationalism and vicious competition.  Things get tribal.  Trust will be in short supply.  Soon, it will be either yours or mine.

Well, what the fuck do I know.  But it is getting harder for me to watch t.v. shows or movies about the good old days when we went out to see and experience things.

I'm sure I'm not the only one.