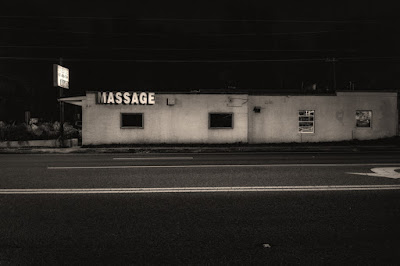 Now that Q has confessed to taking nudes of his mother (link), and that he enjoys looking at them because he has lent her an air of dignity, I am questioning my recent foray into the photography of late night buildings.  We all want to see these pictures of his mother, of course, me especially, as these photos are more than just photography, more than just using a camera to make an image.  They represent a delving into the secrets of relationships, the unseen bond between soma and psyche.  They speak to the complications of relationships.  They speak to intimacy and trust.  Every picture I take now seems inconsequential by comparison.  Everyone takes photographs of their dogs and their kids, but Q is into some serious shit here.  He has been sandbagging us for years.

I am intrigued by such things.  Katherine Harrison wrote a biographical work about her affair with her father who began by photographing her (link).  It is a most powerful work.  The reviewer for the Times said "The Kiss" was appalling and beautifully written.  He should have said fascinating instead, but you know how people need to put on a face to meet the faces that they meet, etc.  Harrison has written several books on the subject, but she has never revealed the photographs to my knowledge.  I, for one, would like to see them.

Lee Miller, the famous model and photographer (link), was photographed by her father in her teenage years.  I saw some of the photographs years ago.  They were beautiful.  But they are long gone, now.  Miller's son has sought to expunge the record of those images, and he has bee quite successful.  Perhaps, like Q, he wanted to keep them for himself.

For some people, almost everything is TMI.  I've never had enough information, myself.

Yesterday was a diet disaster.  I skipped the gym for a second day in a row.  I just didn't feel up to it.  Instead, I had my mother over for lunch.  After giving her hell about serving hamburgers the night before, I had a craving for hot dogs.  I made my first potato salad, too.  To wash it all down, I bought that European American beer, Heineken.  It was quite something.

After my mother left, I cleaned up and went to buy some things I had forgotten at the store, then I sorted photos again until it was nearing sundown.  I had decided to pack up some gear and drive far out of town to make some rural night pictures couple counties away.

But I was too anxious and left too early.  The highway was nearly empty, and I made it to my destination far quicker than I had imagined, so I drove old highways looking for pictures and for things I could come back to when it turned dark.  I made turns based on what I assumed was intuition.  Once in awhile, I'd see something, stop, get out of the car, and run back to photograph it.  I was mostly driving, though.

I will tell you this.  Anyone who doesn't think that driving around country roads on a Saturday night in the rural south isn't scary is scary themself.  Biker bars, dirt roads, and pickup trucks.  People rev their engines or honk their horns when they see you alone on the side of the road with a camera.  People are particular about their property, too.  They want to know what you are doing.  Pulling up in front of old motels, parking on the side of the road, running up onto a premise where god knows who is staying for what purpose, license plates exposed. . . well, you get the idea.

Toward sunset, the tire light on the dash lit up .  What the fuck?  I pulled into a gas station and got out, walked around the car looking at the tires, checking for nails, kicking them to see if they were flabby. I didn't find anything, but I imagined myself on state road number fuck you in the dark with a flat tire.  Oh. . . and I was drinking.  I had an idea when I left to fill the flask up with scotch just in case.  I thought it would be a good idea when the cracker cops showed up to see what I was doing.  Still, I wanted to make some photos after driving all this way.  Finally, it was getting dark enough for the lights to show up, I thought, but when I took the photos, they didn't look like much on the screen.  So I drove some more, imagining one of my tires deflating.  I stopped again to check, but found nothing. Thump-thump, thump-thump.  It was sure to happen.

Then it was dark.  I'd driven far out on a lonesome state road that was mostly empty but for the occasional place, the most interesting a sprawling marina of a barbecue joint that had covered seating outdoors for what looked like hundreds.  Motorcyles and pickups were filling up the parking lot.  This must be the thing to do out here in bum-fuck on a Saturday night.  A lot of eating and drinking and fighting, I imagined.  Jesus, where did all these people come from?

I decided that I would go back and try it one day.  With friends.

I was looking for the places now that I had mind-marked as stops on my way back into town.  Trouble was, I had made so many turnings looking for things in the hours before dark, I was having trouble finding them.  And I was hungry.  All I had eaten was one and a half hot dogs, some potato salad, and some beers.  And the scotch.  I kept imagining I felt a wobble in my tires.  I was tired and I'd been driving for hours.  I realized how much of a homeboy I had become.  Fuck it.

I decided to drive back.

Somehow, though, I missed the turn for the interstate and was forced to drive through successive towns full of the usual roadside crap--strip malls, Walmarts, and chain restaurants--before I could find another on ramp.  Finally, now nearly halfway home, I was able to get back onto the interstate.  I was eager to jet back to my own comfortable haven.

It was way past dinner time when I got back to town.  I opened a Heineken, popped some edamame in the microwave, and heated up a hot dog.  What the hell.  Other people did this all the time.

As I sat down to eat, I thought about how difficult it was going to be if I plan to photograph Americana.  It will require travel and overnight stays in places I may or may not wish to be.  There will be flat tires and engine trouble.  There may be beatings and cops.  Nothing good is ever easy, of course.  But man, I thought, Q has the right idea.  Just stay home and take naked pictures of your mother.
Posted by cafe selavy at 8:37 AM