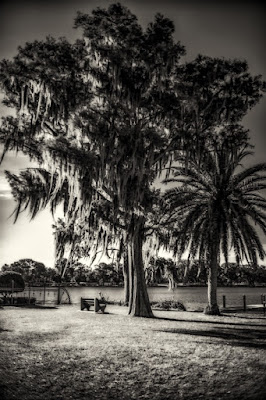 Gene was massive and one of the strongest guys in the gym. His deadlift was almost as good as Lizard's, but his squat and bench press blew everyone else out of the water.  He was already established when I joined the gym.

He was a fair ginger whose incisors were slightly fanged.  His eyelashes were almost invisible and he just barely bordered on looking albino.  Not truly, but he reminded you somewhat of that.  He worked as a baggage handler at the airport and had a wife.  He didn't hang out with the other fellows at night unless they went to a professional wrestling match.  But bars were out.  He had what passed for a normal life in the gym crowd.

Gene had served in Vietnam as a helicopter gunner.  That is what he said.  Like Van, he claimed to have killed a lot of people.  It was rumored, however, that this was not true, that Gene lied about his time in the war.  It seemed odd, but you never know what's in people's heads.

For some reason, Gene liked for me to spot him when he lifted.  He set gym records for both the benchpress and the incline benchpress in the same afternoon.  I forget the exact amounts, over 600 pounds.  Something hideous.  He seemed to do it casually.  He didn't spend a lot of time getting there.  He was made of something other than flesh, it seemed.

After that, I claimed to have the gym's bench press spotting record.  I wanted to have my name put up on the records board.

Of course, Gene used a lot of steroids.  And when his joints hurt, before a lift, he would dissolve cortisone powder into DMSO and rub it in.  These were things he got at the harness shop for his horse.  Lots of guys in the gym seemed to have horses, and harness shops apparently didn't to ask for proof.

One day, Gene quit coming to the gym.  His kidneys were failing.  Everyone knew why.  He'd been doing 'roids for years.  He always looked like someone waiting to explode.  One day, about a year after that, Gene walked into the gym.  He was still bigger than most of the guys who were working out.  He just looked around for a minute, picked up a dumbbell and put it back.  He leaned against the front counter apparently lost in thought.

I asked, "Gene, when are you going to come back?"

"Man," he said, "I don't have anything to come back with."  He looked like he was someplace else.

That was the last time I saw him.  I never heard anything more about him after that.
Posted by cafe selavy at 7:13 AM