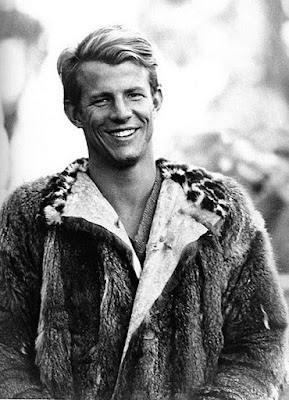 Peter Beard has gone missing (link).  Missing for weeks.  His wife, Nejma (link), has been quiet about it.  Twenty years younger than he, she has had some trouble managing Peter.  I knew the inevitability of this, talked about it with my travel/art buddy about a year ago.  Still, it makes me sad. It is just another thing from the old world disappearing.  You can't be Peter Beard any more.  There isn't a chance in hell.  And maybe that is how it should be.  If you've ever watched interviews with him, you know there is something off-putting about him.  His life is a fairy tale that should only be recorded in words and pictures.  It is mythical, and mythical things suffer in the literal world.  His life is like the legends of the Loch Ness Monster and Big Foot.  It is impossible.  He is like a cross between Hugh Hefner and Hunter Thompson.

I first came across him when I was in my last year of high school.  For Christmas, I bought my father a copy of "The End of the Game."  After he died, I kept it.  Over the years, I bought many Beard books and read whatever I could about his life.  Living in a tent in Kenya half the year, living in Montauk and NYC the other.  The women who shared his tent.  Clubbing with Warhol.  Photographing crocodiles and elephants.  The legendary scrap books.

One day in the early '90s, I was stumbling around SoHo on a Saturday afternoon which is my Rain Man habit when in the city.  I had been walking every street, again, my habit, trying not to miss a thing.  Now SoHo was a different place then, just emerging, and the shops and restaurants were magical.  It was unlike anyplace you could go in the world, and it was a collection of every off-beat, magical, wonderful thing you couldn't even imagine.  As I say, I had been walking the streets all day, and tired and worn, I turned down a final street, a marginal street, to look in a shop that sold the huge vintage advertising posters from the early 20th century.  When I was done, I turned to take in one more street, a street that marked the edge of the territory, so to speak, and I ran into something unbelievable--The Time Is Always Now Gallery.  It seemed a crazy name and it was certainly in a crazy place, but I was curious.  What I walked into was the famous Peter Beard Carnets African show.  My knees buckled.  It was like stepping into Wonderland.  It wasn't a gallery, it was another world.  Boulders and animal skins and Beard's largest works and all his notebooks displayed.  This was before cell phones, at least for almost everyone.  I was alone in New York.  It was impossible.  I had been seconds away from never knowing it was there, of never seeing it.  The amazement still lingers.

That's the way to go, I think, just wandering off, no hospital beds, no IVs, no tubes or chemicals.  I hope it didn't hurt.
Posted by cafe selavy at 9:29 AM