What Is Wrong with Me? 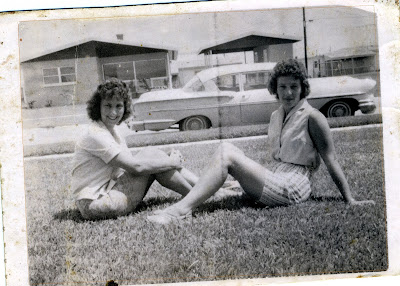 I think people forget sometimes when their parents get old that they still have a lot of vanity.  I've been looking through some pictures taken of my mother over the years.  There she is in her teens, twenties, thirties. . . eighties, and she is posing and smiling in ways I don't see her.  She is on trips, with her friends, being herself and not my mother.  There is a shock of recognition, or maybe the opposite.  It is hard, even in my own advanced age, to think about my mother's life beyond motherhood.

I guess I never grew up.

So. . . what I wanted to tell last night was about a FaceTime call I got from Q.  He has never done that  before.  We text and email and talk on the phone, but never FaceTime.  When I answered, I did so in our usual vulgar manner.

"Hey, watch it," he laughed, "there is an eight year old in the room.  What are you doing?"

I was certain I had just reinforced all the things she likes about me.  "Why," I wondered?  "Why do I do such things?"

I was like Eddie Haskel for the rest of the conversation.

The feral cat came back.  She was at the door last night around dusk.  I grabbed the feed bag since she hadn't been by for almost two days, and I gave her hell as I filled her bowl.  She meowed to me nonstop for a few minutes, but she only nibbled at the food.  Apparently, it was not hunger that brought her here.  She has come back again this morning with her boyfriend, the cat next door.  We went through our routine as we always do.  She is laying in the garden now.

That's just the way with alleycats, I guess.
Posted by cafe selavy at 8:24 AM