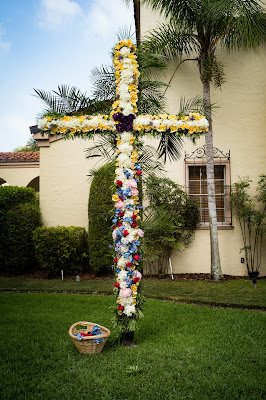 Drunk before dinner?  Hmmm.  Not quite.  But after my Easter walk, I showered up and went over to mom's for the first time in over a week.  I took mimosa juice and we sat out in the heat and humidity and drank a bottle of champagne while we chatted.  The street was quiet.  We watched a couple of young black snakes hunting in the grass.  I used some of my zoology degree on mom.  I was giving her back some of her money's worth for my education.

Before I went over, though, I saw the Easter Bunny on my walk. 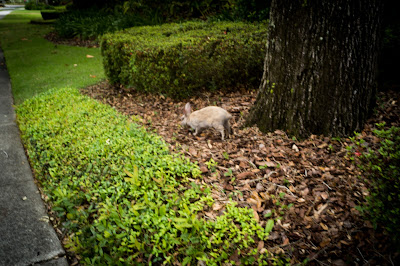 The photo is our of focus, of course, because I carry a manual focus Leica instead of an autofocus camera.  I like to be cool like that.  Consequently,  I miss a lot of the hurried shots that I come across.  And the Easter Bunny wasn't waiting around for me to focus.  He was hippity-hoppity on his way.  He (really?--why am I so binary?) was in a nice neighborhood of trillion dollar homes where people keep their pampered pets on leashes.  The Easter bunny knows a thing or two about living.

Ilianna was named after Easter, so it was always a big deal for her.  Her father used to get her lavish Easter baskets.  When she and her previous boyfriend had their own law firm, he used to give her Faberge Eggs or something swanky.  Maybe a Lexus, I don't know.  But I am no good at celebrating and I don't have fuck you money.  I come from hillbilly roots, and Easter was made up of cheap baskets with green plastic straw and hollow waxy chocolate bunnies and hard boiled eggs colored in Rit dye.  I was not a fan of pastels nor of dressing up, but that seemed to be Easter, a day to be gotten through.

But Ili wanted something that I didn't know how to do.  One year, I went to Williams and Sonoma and bought big baskets for her and my mother.  I don't think it went over well, though I thought I had done something really fancy.

Today was nothing like that.  My mother and I sat in plastic chairs in casual clothes and drank mimosas and, as the hillbillies say, shot the shit.

When I got into the car to come home, a Latin jazz show was coming on the university station.  It is a good show.  But the dj speaks English without an accent. . . until he says "latino," or any other Spanish word.  And then he quits speaking English.  Confused?  Yea, well let me try to explain.  When I was a kid, we used to play war, and the war we played was WWII because that is what our dad's fought in.  Some of us would be the French and some of us would be the Germans and some of us would be the Italians.  None of us could speak those languages, of course.  We could barely speak English.  But we knew the sounds.  And so the boys who were Germans spoke in gutteral sounds with lots of "k"s in the middle. "Fochin veakin fochin," he'd yell, to which the Frenchman would answer, "Fo few shanshay."

I took a French intensive course my last semester in college so that I could graduate.  It was summer, and it was fifteen credit hours, so all we did all day was French.  And that is the way to learn a language.  But getting the accent down was tough, so on Fridays, the three instructors would hold the afternoon session in the Rathskeller and buy big pitchers of beer.  And after one or two, boy-o-boy did our French accents improve.  You have to change the shape of your face, you see.  The sounds are further up in the buccal cavity and there is a lot more use of your lips.  All embarrassment left us.  We sounded like we were from. . . well, maybe Quebec.

I used to ask non-native speakers of English to remember how they "spoke" English as a kid before they knew the language.  I had people from all over the world do it for me.  It always sounded the same no matter where the person grew up.  It sounded like a snake chewing gum, just a bunch of hissing "sh" sounds with vowels and the occasional consonant thrown in.

My point is, language is more than words, so when the dj breaks into Spanish. . . well, I'll tell you the truth. . . it just pisses me off.  He is going along speaking English, then all of the sudden, the sounds change radically.  It is not just the sound, it is the intonation and everything else.  "Lahhdeeenoooo."

Sure motherfucker.  Then say "choose" instead of "shoes."  "Led me find my choose."

I don't think I am jingoistic or xenophobic.  I really, really don't.  But I am admitting a failure here, if it is one.  Just quit it.  You wouldn't like it if I started using clicks and stops when I talked about the !Kung bushman, I think (link).

Skip ahead one minute if you choose to go to the link.

I should mention I did grad work in anthropology, too.  I'm a real failed academic, I am.

I've had scotch since I got home, so maybe I am a little drunk.  And I think there was one more thing I wanted to get off my chest today, too, something I thought of on the drive home.  But I'll be goddamned go to hell if I can think of it now.

Oh. . . I just remembered.  And it is something I will hold onto and see if I want to tell you in the morning.  This is good enough for now.  I hope you all had a happy, happy Easter.

And I hope you were swell enough to give Faberge Eggs as well. 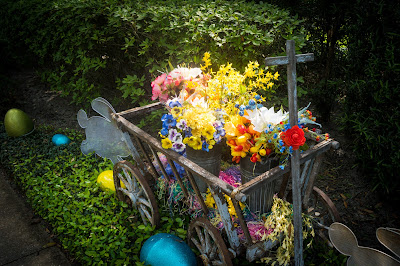