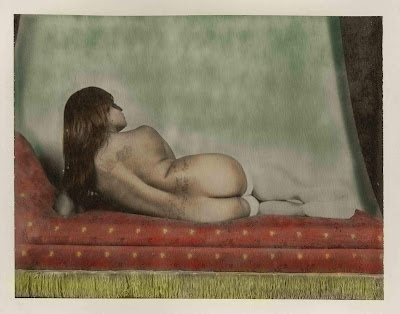 They found Peter Beard's body.  I was hoping he would turn up in a rundown whorehouse somewhere.  At least they found him in the woods.  Even crippled and demented, he knew he didn't want to die attached to medical devices.  I guess.  I could be wrong.  He might have just gotten lost in his mind and his body and everything that happened was pure accident.

I'd prefer to believe otherwise.

I'll post this photo in tribute to his dead old ways.

“The last thing left in nature is the beauty of women, so I’m very happy photographing it,” Mr. Beard told the British newspaper The Observer in 1997.

We no longer live in nature, of course.  We no longer even believe in "the natural order."  All is a construct of human thinking brought forth in constructed language whose meaning can never be final.  That is to say, it is untrustworthy unless you are saying the right things.  Thank god for those who see beyond the paradigms of language and thought that trap us.  They will keep us safe.

I get it.  I really do.  And I appreciate the process.  I encourage it.  I have been a practicing iconoclast.    But, man, I do think that photo pretty.

Oh, hell, I almost forgot this (link). Q sent it to me yesterday.   It is a wonderful tribute to our president.

I’ve seen Trump snort Adderall, shit himself on a TV set and make his 16 year old daughter give him a lap dance.

That should be a pay-per-view show.  I'd buy it.

Last night I watched Trump tell a CNN reporter that he didn't have the brains he was born with.  It was something my dad would have said.  Old Trump is like a walk down memory lane.  He is almost pre-verbal, but what he manages to get out are like old recordings from long forgotten b-movies.  They are just lodged inside him waiting to emerge.  I don't know how my friends can not watch him.

T.C. Boyle was a wonderful writer who contrasted nature and human nature.  When humans interfered, as in launching a satellite to put a new moon in the sky, everything went awry, goats fucking pigs, etc.  He wrote some great stuff about chimps and language and Jane Goodall types.  I sort of lost interest when he wrote "The Road to Wellville."  I liked his short stories best.  But I just looked him up, and wow--he's written miles of things I've not read.  Maybe I will pick up something new by him and see.  He was really good when he wrote about natures in collision.

I noticed yesterday that some of the images of my recent post are gone.  They were there, then they weren't.  It makes me wonder what is going on.  If you can't trust Google with your treasures, who can you trust?

O.K.  That is all I've got today.  I need to get out of this chair and look to the day.