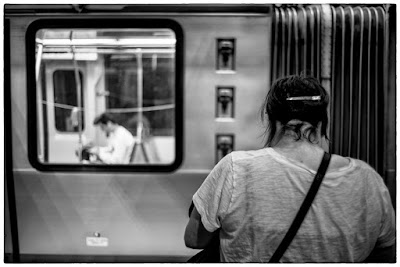 I can't show any more photos of the neighborhood houses.  I can stand to take them, but I can't keep posting them as if. . . . It is not that a picture of a woman's back in a subway station is inherently more  interesting at all.  It just is a reminder that I could once go out and see the world.  Like everyone else, I want to go out and see the world.

Not all people, perhaps.  I shouldn't generalize so.  Just Trumpians and a lot of the Bernie people and probably some of the Creepy Uncle Joe supporters, too.

I'm reading "My Dark Vanessa," right now.  I'm about fifty pages in.  She is nailing the complexity of emotional desire and how it gets wrapped around sexual desire.  It is wonderful what art can do.  She needn't analyze it.  She paints it's portrait in delicate brushstrokes.  She lets readers feel what happens when we add social currency to the mix without telling them how they should feel.  Indeed, she lets readers contend with their own emotional confusion.

At least so far.  It is a long book.  I reserve the right to change my view on this.  But I'm intrigued so far.

I watched The Donald again last night.  Jesus, that fellow is good for laughs.  He is a natural entertainer.  He can say less with more words than anyone I've ever seen.  And he loves to repeat a thing.  The only addition he could make to his act is Tourettes.  He is almost there, but he needs to hit that note full bore.  Watching him, his quirky facial expressions that are more robotic than human, fascinates me.  He is like one of those old Chucky Cheese animatrons that would come alive on the wall and begin talking.  When he listens, he cocks his head and screws up his mouth in such artificial ways you have to wonder.  Last night, he fucked up reading his cue cards and couldn't figure out how to fix it.  He looked like Ronald Reagan in a Presidential debate, forgetting where he was, forgetting the question, then just smiling and switching gears as he would tell a story about him and Nancy driving down the Pacific Coast Highway.

I am over my anger with him.  It is not him.  I want to say that I live in a nation of idiots, but my neighborhood is full of highly educated people who support him, doctors and lawyers and Indian chiefs.  I keep watching Trump to see what I am missing.  I can't just assume I'm right and they're wrong.  I have to keep searching.

Now, since the N.Y. Tines and CNN both seem to take direction from this blog, I am going to bring up a contentious point that I haven't heard floated as a rebut to The Donald's claim that he brought about the best economy in the history of the world.  I'm not sure it measures up to Byzantium, but I'll concede the point because it really doesn't matter to my argument.  What matters is. . . what the fuck did you do with the money!  America is falling apart.  The roads are fucked, the bridges are collapsing, the water is toxic, and you can't breathe the air without getting damage that the Corona virus can attack easily.  The greatest economy in the world and we have the shortest lifespans and one of the highest infant mortality rates of any first world country.  We don't have enough doctors to take care of our citizens.  So, big DT, WHAT THE FUCK DID YOU DO WITH THE MONEY!

The trouble with this election is that Biden can't really attack on that point.  He will be as susceptible to the criticism as The Donald.

It doesn't matter how much money there is if you have to wait a month to see you doctor or if it takes you hours to get to work because the roads are so congested.  Rich people have more money than ever.  I don't care.

And yet he will get elected again, I think.

The earth likes us in lockdown.  The skies are clearer and the rivers run cleaner.  Animals are reclaiming some habitats.  Wouldn't it be wonderful if. . . .

But that will never happen.
Posted by cafe selavy at 9:03 AM