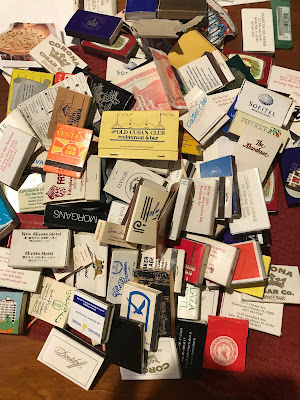 So. . . I just went on a rant.  But I want to settle my mind and nerves a bit since it is THE WEEKEND.  You know.  This is what matchbooks looked like for those of you too young to know.  I'm pretty certain that a large segment of my readership is under 30.  This picture was sent to me by my travel/art collector friend.  He says the matchbooks are from over thirty years of travel from three or four or six continents.  Remembers every place and what happened in each. 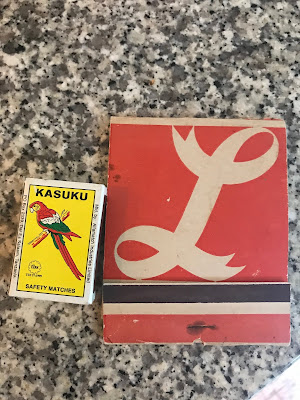 And Our Friend of the Blog Lisa sent me this.  Extant matches.  There you go, kids.  Eat your hearts out.

I was once again mistaken for Tom Nowicki yesterday.  We've each lived in this town forever, and this has never happened before.  I guess that at some point, all aging men begin to look the same.

Last night, I watched "Saint Jack," a film by Peter Bogdanovitch, adapted from a novel written by Paul Theroux, starring Ben Gazara.  1979.  Pimp with a heart story set in Singapore.  I haven't seen it since then, and I was surprised how well it held up considering it has all the cliches and naiveness of the era.  But you know, sometimes in a moment of weakness, it is fun to like an old cliche remembering that all cliches began as fresh ideas.  They only become cliches because they were so good people repeated them again and again.