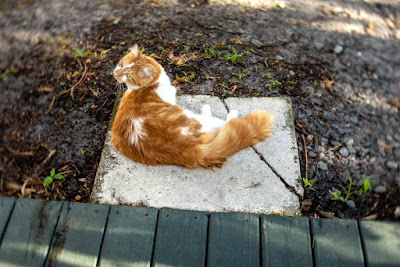 Isn't he a beautiful cat?  He is my neighbor's, but he has a secret life here.  He comes whenever I am out and rubs against my leg until the feral cat comes to get him.  Then she acts like a herd dog and keeps him away.  Lately he has been licking her head as if he loves her.  Then she'll stick her tail up and her butt in his face and he will lick her there until she can't stand it any longer.  They lie together and they tussle.  He and I are the only two friends the feral cat has, but I think she is plenty lucky in that.  We are two handsome boys, we are, and both as generous as we can be. 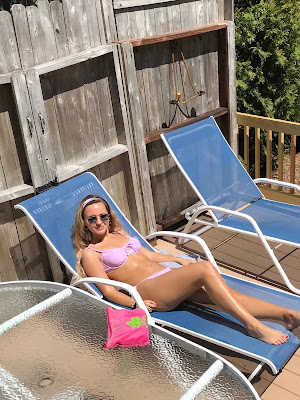 I walked down the Boulevard today around noon coming home from my usual stretching of the legs.  For the past couple months, I could walk down the middle of the road.  Today, you wouldn't have been able to find a parking spot.  They are open for business.  The stores had there doors open.  People meandered all about.  The restaurants were open and people were seated and eating.  There was not a mask to be found.  They want to believe the politicians more than the scientists, of course.  Our government wouldn't do anything that would place us in danger.  I hope they are right.  I don't want anyone to get sick and die, but I have my doubts.  But if u.v. light was going to kill this virus anywhere, here, today, was the time and place.  Oh, people, you haven't seen anything like it.  It was most gorgeous.

But science, right?  It is truly wonderful.  It is not always completely accurate, but it tries.  And when someone shows it has not been, scientists cheer.  That is the difference between science and religion.  And science tells us that right now, it is not a good idea to go into herds.  I hope they are wrong and Trump is right, just for all of our sakes.  But fuck me. . . Trump?

I am privileged and can stay isolated as long as I want.  And I should be cheered that people are off the unemployment rolls so that my pension might be safe.  I am as selfish as the next person, I guess, but I still wish we would wait another month.

Biden today suggested that he would be only a one term president.  WTF?!  C.C. termed him "Placeholder Joe," and I think that is as accurate a phrase as I've ever heard.  Biden is a liability.  #MeToo cannot give Kavanaugh the 3rd and Biden a pass.  There is no justice there, only partisanship.  They should never have pulled that trigger on Kavanaugh.  He had enough shit in the trunk to go after.  But they did.  It was the easiest thing to do.  So I say. . .

Cuomo could win in a landslide.  Biden will not win at all.  It will be another nail biter, but Trump will beat him like a cheap mule in another non-majority victory.

We can't do four more years of Trump.  But the democrats are a Balkanized state of misfits and marginalia.  They are not a unified party but a party built out of mutual need.  They are not like the monolithic right.  To win, they need a really good candidate.

And I'm not even sure if I like Cuomo.

Oh. . . the second picture?  Just another kind of cat.  I didn't take the photo, of course.  She has the wrong leg bent.  The front leg should be flat, foot on the floor, the back leg bent.  But that's just me.  She is a lovely girl, and one day when I photograph her, you will see.  Until then. . . I can only give suggestions.

That's my evening ramble.  Stay safe and don't let the virus ruin your life.  Projections show that there will be a surge in Corona infections.
Posted by cafe selavy at 7:09 PM