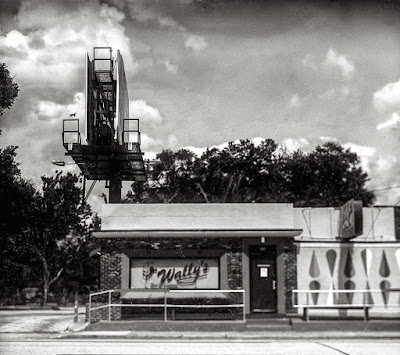 Let me document my failures here.  Of course, that is nothing new.  Document?  Let me whine and cry and shit my pants over them.  That sounds more like it.  That is what I do.

In the most charming of ways, of course.  If you don't believe it, ask me.

I took out my big old Liberator camera on a tripod yesterday, got in the car, and drove somewhere to make pictures with the glass plates.  I loaded up several holders.  I had meters.  I was set.

Traffic was crazy.  I parked on a busy street that was originally a highway but now is something else. Traffic was so bad, I could barely get out of the car.  I went to the sidewalk side and took out my gear.  I walked down the street and set everything up.  It was laborious but I was having fun.  Cars honked and people yelled at me as they drove by.  I had chosen a very famous dive bar to photograph.  It is famous for the hardest drinks in the land.  I sat there one afternoon having a drink while I waited on someone.  I ordered a Cuba Libre.  The bar maid poured a water glass full of rum and spritzed some coke on top.  Fuck me, I thought, that is no afternoon drink.  A woman came in, sat down, and ordered a double.  Everyone in the bar began to laugh.  It was a bar and a package store.  On a Friday or Saturday night, people were sitting on boxes of liquor because the tiny bar was full.  It closed its doors in the last year, but someone has bought it and is re-opening it with the same name.  Corona, however, has stalled all that.

I was going to make two plates of it, one with iso 25 and one with the impossibly slow iso 2.  I metered with my spot meter and with the app on my phone, took my time, and made the two exposures.  I was pleased with myself.  Then I picked up my gear, walked a ways down the street, and set up to take a photo of a tattoo parlor that looked great.  I repeated the processes.  The whole thing took perhaps fifteen minutes.  Then I loaded up the car and drove home.

It was my usual time for going to my mother's.  I was anxious to develop the plates to see what I had gotten, but I am also a dutiful and loving son, so I put everything aside until I got home.

I developed the iso 2 plates first, as I could only do two at a time.  It took about twenty minutes of pouring developer, agitating every minute, rinsing, repeat with fixer. . . and then. . . two black plates.  Nothing.  No image.  Just black.

So I did the same with the iso 25 plates.  One black and one with the image you see above.  What went wrong?  I am thinking that the only one that came out was the one I shot with my new plate holder.  But maybe I did something wrong in shooting.  Perhaps I left the shutter open.  I don't know.

When I scanned the good plate, it did not look good.  The building was not in focus.  The trees are and the sky is, but not the building.  How could I have missed focus so badly at such a distance?  That doesn't make sense to me.

So guess what?  I'm going to try again today.  I'm going to see if I can't figure this thing out.  Hours.  It will take hours.  And maybe, if I get lucky, I'll have an image.  WTF?

My Stephen Shore book came.  I haven't looked through the whole thing yet, but by and large I am finding it disappointing.  But it is also inspirational.  It gives me ideas.  I'm arrogant enough to think I can do better.