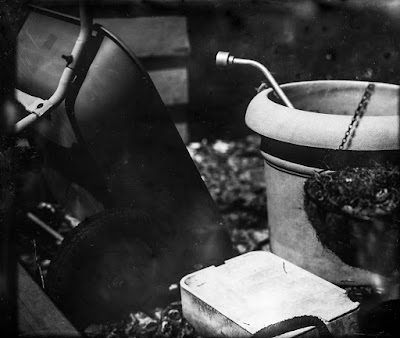 I tested glass yesterday.  Glass plates.  Photographic ones.  It was a lot of work.

You see, I sit too much now.  It takes most of my time to do nothing.  I ponder.  It is o.k.  I mean, I have years of pondering time in the bank account, having not had as much time to do it in the past.  I was busy.

But the things I've been pondering are really not fun, so I decided I needed to move.  I didn't want to do anything productive.  I could move by weeding.  I could move by replacing boards or painting the house.  But I don't wish to do that.  I've decided I am much better off letting someone else do those things.

Recently, I bought a glass plate holder from a guy who has invented a rather ingenious system.  The holder is simple and loading it is a breeze.  I got the one that holds glass plates.  It will hold either wet or dry plates.  It doesn't matter.  I thought I might start doing some wet plate colloidal photography.  But in the interim, I have J. Lane dry plates I can use.

So. . . I got my ass off the couch and started looking for all the necessary equipment.  Found the camera.  Found the glass plates.  Found the right lug for the baseplate and found the correct tripod.  I even found the lens made to help with focussing.  Man, I really thought finding everything was a miracle.  I got my darkroom tent and set it up outside.  I found the developing tank for the plates and took the holder, the plates, and the tank to the tent.  I loaded the glass plate in the holder and left the rest in the tent.  I fitted my big Liberator camera to the tripod and took it outside to the deck.  I would run a test plate, so it mattered little what I photographed.  I got my spot light meter and took a reading, then used the app on my phone to do the same.  The readings were slightly different, so I took the median (or is it mean) of the two as my setting.  I focussed the camera, slid the plate holder into the back, set the aperture, and hoped I was doing everything right.

I took the film holder back to the tent, removed the exposed plate and put it in the holder for the developing tank.  I went back into the house and got the one-shot developer/fixer I had planned to use, poured it into the tank, and set the timer agitating the tank ever minute as prescribed.  Six minutes later, I poured out the liquid and took a look at the plate.

Shit.  I have never had good results, I remembered.  Well, I needed to keep moving, so I decided to do the more complex thing.  I would develop it with the standard three bath method, developer, stop, and fixer.  I located the chemicals which I had mixed up months ago.  Fortunately, there was some of all three.  I measured them out into graduated containers and went back to the tent.  I loaded another glass plate, went to the camera. . . etc. . .  then back to the tent to load the developing tank. . . back to the house, set the timer, pour the developer, agitate, pour out the developer, pour in the stop, pour out the stop, pour in the fixer. . . .

I hadn't much hope when I opened the tank.  But I was wrong.  There was a seemingly perfect exposure.  All this time, I thought, I've kept trying to use the short method and it was the problem.  Now I had an exposed plate that looked good.

I put it in water to wash and got ready to go to my mother's house for our usual afternoon beer.

The day had been gorgeous as the days have been the entire month.  We sat in her driveway and chatted while the dry, warm breeze wafted around us.

After our visit, back home, I finished rinsing the glass plate and set it to dry.  But I had an idea I wanted to try.  The glass plate takes a while before it is dry enough to be handled, so I decided to rinse it in 91% isopropyl alcohol which would evaporate much quicker.

Oops.  I could see it was warping the coating.  I took it to the bathroom and dried it with the hair dryer.  I was gentle. Then I took it to the scanner, got the proper holder, and set things in motion.  After that, I imported the image into Lightroom to tweak it.

Now if you think this was boring reading, you should try writing it.  But I wanted you to understand what it takes to make one image this way.  It is really a lot of work.  It makes you wonder why you would do it when digital cameras are so quick and easy and wonderful.

Besides, as you see, there is a lot wrong with the image I produced.  It has some weird light halation toward the center bottom that I can't figure out. There are pinholes in the emulsion which may be the result of the alcohol.  And, the result is a picture of. . . a wheelbarrow and a hose holder.

I am going to make some more images today now that I have a working method.  I will try to find something more interesting to photograph, but I probably won't.  I can't walk very far with the big camera and tripod, and I can only carry one plate.  I have to reload in the dark tent every time.