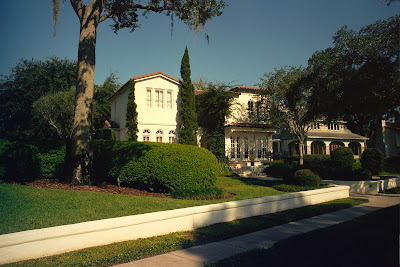 Let's do more film today.  Living color.  It makes black and white photography seem so gray.  It is expensive, though, if you shoot film.  It has that going for it.  And you never know what you are getting.  It is always a surprise.
I have a confession to make here, in public.  I feel I have let my fellow abstainer down.  I didn't have a good day.  It happens about every day or two now.  I just feel pooped and a bit wobbly.  So last night, after dinner, my stomach felt. . . well. . . bloated.  So I had a digestif.  I had a scotch.
Sorry, bro.
But I am right back on the wagon again.  It was a medical necessity.  My stomach settled right down. But I feel like a married man who just kissed another woman.  Nothing more.  Just a kiss.  Still. . . .
As much as I enjoyed watching Don Draper, I couldn't.  You will say, "Of course you couldn't.  You don't look a thing like him."  Ha!  But that is not what I mean.
I'm just not built that way.  So cheating with the drink last night dismays me.
I'm hoping I feel better today.
My state is set to become the new epicenter of corona.  So they say.  We are hellbent on it.  Nationwide, cases are up, but deaths are down.  That can only mean one thing--young people.  As soon as we get rid of all the old people, AIDS victims, diabetics, asthmatics, etc, the world can get back to "normal."  It is just natures way of population control.  Wouldn't it be something, though, if it made you sterile?  I wonder if young people would care?  They don't mind killing grandpa, but I wonder if they would mind killing the unborn?  I'm not sure how LGBTQ weighs in on this.  I'll have to check with CNN.
But since we are going to host every major sporting and political event, and since we have opened up every kind of business, almost all to full capacity, I will probably be staying home a good while longer.  I will become even more grumpy and cranky as I sit in the cave moping and weeping while everyone else goes out to party.  I dwindle into nothingness.
So it seems, anyway.  Without drink.
Having taken away one of my few pleasures, in the words of Dr. Thompson, what is left but endless hours of watching t.v. and relentless masturbation?
Posted by cafe selavy at 9:39 AM