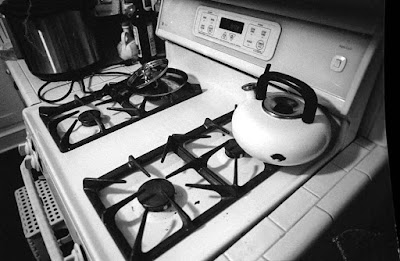 I thought I'd post a sexy picture today, something that would appeal to your most appalling instincts.
Instead, I settled on this.  Glorious black and white shot in wide angle with a flash.  There is something appalling about it.
Appalling rather than appealing.  Fit for the times.
I thought I would sleep better when I stopped drinking.  Such has not been the case.  I don't look any different, either.  My friend who stopped (I should say "stopped" because we both agree we haven't "quit") tells me he has already lost weight.  I am cursed.  I always have a careful diet.  Here, you are looking at my cooking quarters.  I have cooked a healthy meal here almost every night this year.  I have ordered takeout twice, once for my mother and once for myself.  Otherwise, it is all animal flesh and vegetables and grains with a couple cookies or an ice cream sandwich here and there.  Breakfast and/or lunch, too.
O.K. O.K.  And some potato chips. But rarely.
I would like to abandon the kitchen for awhile.  Cooking for one isn't difficult, but the cleaning might as well be for four.  It is the after dinner ritual that is most miserable.  And I'm not very good at it.  My pots and pans never look very clean.  They don't shine the way they should.  I am not that ambitious.
I am not very neat in general.  And living alone this year, I have become worse.  I leave stacks of things lying about.  Eventually, they become a natural part of the landscape.  I don't see them any more.
Neighborhood walkers have taken to letting their dogs walk through my yard to see the cats.  I say "cats" because my neighbor's cat spends half his day here.  He is at the door with the feral cat when I get up, and he is there with her at dinner time, too.  I feed her in a bowl and lay a couple morsels on the deck for him as a token since he gets fed at home.  But he sticks around on my deck and in my bushes, and when I go out to stroll the grounds, he follows me around like a dog.  The feral cat still acts like I am going to jump her, and she won't let the neighbor's cat get near me if she is around.  She is like a herd dog, blocking his path whenever he tries to get close.  Then she will stick her butt in his face and he is obliged to sniff and lick.
This happens on the reg, as the kids say.
Fortunately, food prep is easy for them and there is no cleanup.
Today is Juneteenth, a new holiday for the majority of America.  I can hear my old hillbilly relatives saying, "They don't even know what day it is.  Maybe they can't count that high."  I don't think Juneteenth is going to win them over.  Many crackers still use the word "they" when speaking of "them."  Until those lines are crossed. . . .
Even CNN is beginning to admit that current events are shifting the election in Trump's direction.  And old Placeholder Joe has had a lot of practice in losing Presidential elections.  He is one of the best at it that America has ever had.  His V.P. choice might not help him.
Oh, shit.  Look at that.  I've been opining.  It is the result of being hermetically sealed off from the rest of the world but for t.v. and. . . . Don't listen to me.  I'm afraid that I have become a little if not completely mad.
Posted by cafe selavy at 7:32 AM