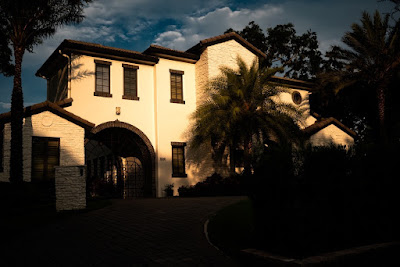 I have to admit, I've been lazy.  I have not been working at making pictures.  I take them, but I do not work on them.  I post scans made by the developing lab instead of making my own scans and post-processing them.  I take my digital images into Lightroom and make a few basic tweaks instead of layering them in Photoshop.  I've not had the energy.  I mean to do better, but I cannot bring myself to sit at the computer and work.  I feel tired and listless most of the time.  My life consists of looking forward to bed.  Long hours pass quickly in repetitive blocks. Nothing moves inside the house besides the fans.  I sit, immovable, and wait.  I don't know if the malady is physical or psychological, real or imaginary.

Late yesterday afternoon, however, I decided I needed to try something that I have been thinking about, a first step in a different way of processing my images.  I'd thought about it long enough.  I needed to see if it worked.

It did.  The image above is the result.  It has a little more pop and depth than if I simply processed it in Lightroom.  Now I will pursue the second step.  This one will take longer and may not work at all, but it is the trying and the learning that is important.

Last night I watched a documentary called "A Sport and a Pastime."  That is the title of one of the great books in literature and was the subject of the doc.  It wasn't anything I'd recommend to anyone who hasn't read the novel nor even to any but a few who have.  It is a fan's note more than anything with no other purpose.  I know as much as anyone about Salter's writing, or I did at one time.  I was in the process of writing a book about it when my wife decided to leave.  I never got back to writing it.

Watching the film last night, I realized that one of the problems I've had with the liberal left is that I am maybe a liberal and an intellectual libertine in equal parts.  Maybe equal.  I must qualify "libertine" with "intellectual" and maybe there is a better word, for I am not devoid of moral principle or responsibility, I just can't find where those are written in stone.  Too, I don't put the life of the senses above the intellectual life.  Rather, I feel, the sensual life is the material of the intellect.

It is this pursuit of the senses and disbelief in the codified morality of the left that has kept me on the margins of things, an outsider looking in.

As I listened to the passages of the novel read aloud by Reynolds Price, I realized that the people I most enjoy are cut from much the same cloth.  They, too, I should think to call Intellectual Libertines.

I'll probably think the terminology silly tomorrow, but I'll leave it for now.

Q and I met Salter at the 92nd St. Y in NYC some twenty years ago.  He and Michael Ondaatje gave a reading there.  It was silly to have the two read together.  It was too much for one night.  I was an Ondaatje fan before he was really a "known" writer, having read "Coming Through Slaughter" and "The Collected Works of Billy the Kid" in the 1970s long before he was known for his famous novels.  I still have my copies of those books in their original small press editions.  But I wasn't there to see Ondaatje, and Q and I drank through a small bottle of scotch with a newly hired lit professor at Columbia sitting next to us who was young and very pretty and had pretty spectacular calves.

Salter read a real piece of shit short story that should never have been published, and we heard him admit as much after the reading.  I've told the story before, but once again, when we met, his disdain for me was obvious.  He liked Q, though.  They talked like real pals.  Before I met him, I had talked with a professor who was about to publish the only extant book on Salter, one that surprised and dismayed me to learn about, and he had sent me an advanced copy as it had not yet gone into print.  He offered to send me the transcripts of his conversations with Salter if I wanted to peruse them.  I had also had dinner with another academic who knew Salter socially, who had had dinners with him and who gave me a phone number where I could contact him.  Both men warned me that Salter was a very formal man and that I would have to approach him in a certain way.  When we met, I think that my disappointment might have shown.  He seemed in many ways to me to be a dandified prick and not someone whose company I would enjoy.

In the end, it didn't matter.  I never wrote the book.

I've been thinking about the essential literature I would keep on my bookshelves if I threw everything else away.  I've started making a mental list, only started, but I know that "The Short Stories of Ernest Hemingway" and "The Sun Also Rises" would be there.  "Gatsby" and "Tender Is the Night" would be there, too.  "Blood Meridian" by Cormac McCarthy, of course.  Wharton's "The Age of Innocence" and Anderson's "Winesburg, Ohio."  "The Sound and the Fury."  "Mrs. Dalloway" by Virginia Woolf. "The Golden Notebook" by Dorris Lessing.  Joyce's "Dubliners."  It really gets to be difficult.

But I would have two novels by Salter there as well--"A Sport and a Pastime" and "Light Years."  For me, they are essential.

I will be thinking more about my list of keepers.  Dostoyevski, of course.  I don't know.  I'll have to really go through and see.

I am paring down the massive amount of things I've collected in my life.  I'm deciding about which cameras to keep.  I think I might only have two in my possession soon, though maybe three.  A Leica M, just because I love the look and the feel of the clumsy things, and a new medium format digital camera that I've not decided on yet.  The tens of tens of other cameras can go.  I have too much.  It is weighing me down.

O.K.  I've rambled and not said what I had intended to say.  Maybe next time.  But now it is Saturday, I think, and there is sunshine outside my window.  I need to move.  That is the chunk of time I have passed into now, the moving portion of the day.  There will be the lunching portion and the napping portion later, then the mother portion and the dinner portion then the loneliness of a solitary television viewer portion before bed.

That's the World of Covid and the life of an intellectual libertine who has, perhaps, stood on the edge of things too long.
Posted by cafe selavy at 9:00 AM