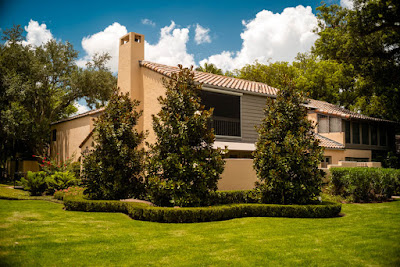 The mundanity of a Sunday summer lawn.  There are lives in that house, the pride of homeownership.  Such a thing.  It is America.

I'm not kicking against it.  In the time of Covid, there is much to be said about having your own home.

But it is also the symbol of White Privilege built on the backs of black and immigrant labor.  I know who maintains the lawn.  I know who cleans the house.  It ain't mom.

Those were bad old days, too.

Now why'd I go and do that?  It was spontaneous.  I was just looking at the picture.

Well, that is not completely true.  I've been sending irreverent quips to Q.  You know, things that would get you into trouble with anyone who is not your friend.  I guess that got me started.

There is something about that picture that I really enjoy, though.  I wouldn't mind making a whole book of pictures like that.  There would be two types of people--those who got it and those who didn't.  I don't think it would be a 50/50 split.

I've been confused about the idea of race lately.  On the one hand, it is a linguistic and not a scientific term.  Genetically, there is no such thing.  I've argued for more than this century that we needed to quit reinforcing the ideas in the educational systems.  I've met with much resistance, usually from white people who consider themselves liberals.  They want to bracket experiences, and I get that, too, but that hasn't worked out so well thus far.  The lines seem to be carved more deeply than ever.  And as long as I look at someone as being different than I am in a categorical way, as long as that is what defines them in the public narrative. . . .

Ah, forget it.  I don't want to write that treatise today.  I've spent too much time going down that alleyway before.

Let's talk about me.  It was Saturday and I thought I needed to celebrate it.  I need to celebrate something in these horrid times, so I decided to make a big breakfast.  I sliced pieces of bread from a big, fresh loaf for toast.  I got the toaster oven down and slathered the bread in olive oil. Then I pulled out some frozen sausage--of the veggie kind--oiled a pan and threw them in.  I readied the eggs and put the bread in the oven.  I got out preserves and then made a Machado since I didn't have champs and orange juice.  I was buzzing around the kitchen like a honeybee, timing everything so it would all be served hot.  I pulled out he plates and dished it all up.  I sat at the dining room table which hasn't been used for eating this year, and dug in.

What a fucking drag.  Such things are really no fun alone.  The food was good, the drink was fine, but there was no laughter and no light.  It was a jailhouse feast, I guess.

And of course, there were dirty pans and plates and dishes and cups. . . .  It seemed to take hours.  Somehow, I had gotten everything in the kitchen covered in oil and grease.

Selavy.  I don't think I'll bother with that sort of lone meal again.

But it was still Saturday after my late afternoon visit with mother, and I was still wanting to party, so I decided to take a chance and get takeout.  I know you all do that, but I still do not trust that I won't get sick from food made by covid crack addicts who have no sick leave.  But WTF?  Sometimes desire overcomes sense, so I ordered up a big old bbq sandwich, sliced brisket on a bed of Cole slaw covered in spicy French fries and smeared with hot sauce.  I knew what it would do to me, but I ate it anyway.

And I was right.  My guts began to grip soon after eating.  Then they got loose.  Again, alone in the house. . . it is not fun to have someone to complain to, either.

So I called my mom.  She thought it was funny, so there was that.

The sun is bright and there is no chance of rain, or so they say.  I should go out now in the drama of light and shadow while it lasts and make more pictures of buildings and things.  I don't want to exercise today.  I just want to walk around and make photographs and have some drinks.  I am still in weekend party mode, I guess.  I am sick of this.

However, last night, I watched a YouTube video by a guy who makes adventures in a sailing dinghy, and I remembered my own adventures in my small, shallow water sloop, making meals on a single burner stove, making coffee in the morning, being all alone at some anchorage, and watching the video made me want to do it all again.

I guess it just seems more heroic suffering discomfort alone in a boat than being comfortable alone inside a house with a Sunday summer lawn in a fancy-assed neighborhood.  Crazy.