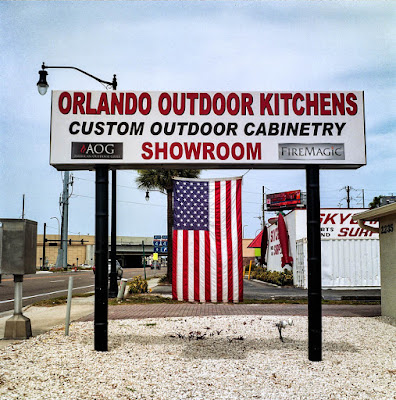 Happy 4th of July.  Q says that in California, to prevent the spread of Covid, people will be allowed to set off fireworks only indoors.  He says his son can't wait.  Here in my own hometown, I haven't seen the usual outward signs of the American Birthday.  In normal times, the banner waves and the bunting abounds, but all I have for you is a picture of what Vidal called the Patriotic Gore.  Patriotism and Outdoor Kitchens have a long and uncomplicated history in this country.  Remember when car lots began using little American flags strung all around their lots to sell cars from Europe and Asia?  I took this photos on one of the ugliest stretches of American highway you are likely to see, a barren, wasted landscape dedicated to commercial blight.  I am reminded that when I drive through some of the worst areas of town, where yards are piled high with old tires and scrap metal parts, where carports are full of precious debris, where houses are badly in need of paint and repair, where families gather in cheap plastic chairs on untended lawns, every other house is flying the Stars and Stripes, that burning symbolic ember of the Great American Dream.  Freedom, it shouts.  Gallantly hailed.

Now don't get me wrong, and you probably don't.  I am a patriot extraordinaire.  I love freedom of expression, freedom of the press, the peaceful transfer of power through the election process. . . all of it.  But in my lifetime, Neoliberalism has diminished much of what made this country wonderful.  Now, through privatization of everything from prisons to military services, we have an infrastructure that no longer functions.  So we mourn the rich who must die flying in private helicopters over the clogged, mismanaged highways of the poor so as not to be inconvenienced.  Indeed roads are no longer built to move traffic but to serve home builders and the Walmarts and Target's that will profit from them.  If you want to get from one place to another and you can't afford the helicopter, they may build a toll road.  That, now, is the price of freedom.

But Trump vowed to fix all that.  Right after he finishes building that wall.  Oh, we all knew that he couldn't win.  It was just entertainment, the big national joke.  He is such a patriot, he celebrated July 3rd.  WTF?

Don't count him out.  Not everyone reads the N.Y. Times and watches CNN.  If you only converse with liberals, you need to get out of your shell and talk to the old Newt Gingrich crowd.  Even a portion of African Americans are straining credulity in backing Joe.

I am going to make a bumper sticker that says Dump Trump 2020.  You won't need to put a Biden sticker on your car.  You can just Dump Trump.

My mother and I will probably have a hotdog together today and talk again about how lucky we have been to live so comfortably for so long.  Born in a rickety farm house during the depression, she, like so many Americans, moved into a solid middle class existence, owning her own car, living in her own home, getting air conditioning and a color t.v. and eventually her own credit cards.  I, the son of American workers, had the luxury to play at Bohemia, wear long hair and march against the war.  I got to go to college and graduate debt free, get a job and become a pensioner.  It's not like being a professional athlete or a famous musician, but I never went hungry and always slept in a comfortable bed except by choice.  So yea, I am a patriot.

Now we just need to escape what my friend calls The National Nightmare.