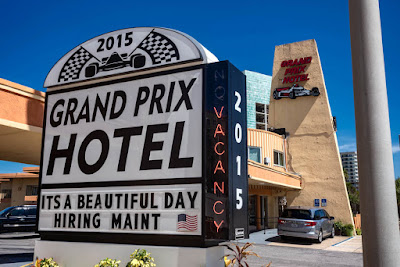 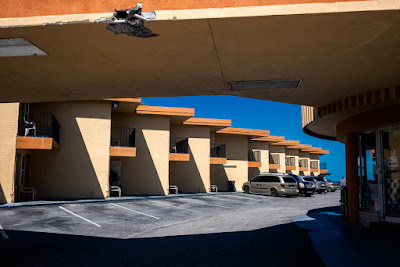 Everyone has gotten really good at taking pictures of buildings.  All over the internet, I see photos that make my jaw drop--all unpopulated.  Well, mostly.  I am not the only one who has been walking around in the Time of Covid it would seem.  And there are fabulous colors, too, mostly from Fuji cameras.  The photos are so good, I am tempted to get one.  Have been tempted for a long while now. It is magical thinking, though, as if a new camera will give me something to photograph that I don't already have.  It would be a new camera and the same old shit.

Same Old Shit.  I was about to throw the towel in yesterday on everything I have been doing, writing, photographing.  I was at the photo store and the kids who work there wanted to show me some of their photography.  They keep portfolios on their phones.  I was impressed.  Damn, the kids are good, and I was daunted.  They want to see my work, but I am not wanting to show them, now.  They are not like the old camera store geeks who would show you pictures of flowers and bees or the weddings they had shot.  These kids have The YouTube and have seen lots of good photographs and have watched tutorials on how to make them sing in photoshop and Lightroom and other add on software.  They shoot film and are technically good.  I am thinking about just giving them my cameras.

And then there is that kid in Great Britain who is writing those wonderful bits on his blog.

It is not just that.  There are many other factors, too.  Even in Covid, they are actively living.  I am a bit of a recluse by nature.  Now, with everything that is going on, I've become Ted Kaczynski.  Not quite, perhaps.  I think I lack his confidence.

Watching t.v. is not helping.  I'm basically watching two shows, "Peter Gunn" and "Californication."  While I sit stranded on my couch, they are living The Vida Loca.  I am not as cool as they.  Hell, I can't even walk without tearing tendons and ligaments any more, it seems.  I sit, drink in hand, until it is time to stumble to bed.  I get up in the morning and wonder who was eating the chips and who left all the lights on.

But this morning, the house is clean and tidy and I slept an entire eight hours without waking.  I had help, but still. . . . And before I began writing, I went through my Covid postings to see if I had already posted a picture I wanted to use. And going back, I felt better.  I wasn't ashamed, I mean.  The Covid Diary photos were not so bad, I thought.  And while there are certainly people who do not get it, I do.  No, they are O.K. I even turn out a nice phrase from time to time, too, though you wouldn't suspect that from the blogs shriveling numbers.  It's just you and I now and the occasional Fuller Brush Salesman at the door.

I picked up film the other day.  All of it was ruined by light leaks.  I may have done that, may have fucked them up in the way I loaded them, but I am not certain.  I get back three more rolls today.  I know I did everything right.  If they have light leaks, it is the camera and not me.  If it is the camera, I am going full on digital.  As much fun as film is, it is expensive and all the cameras are old now and starting to fail one way or another.  I don't know.  We will see.

The camera I REALLY want is the new, very expensive Hasselblad.  I should have my hand chopped off if I buy it, but that is not completely dissuading me.  Let's say I bought it.  How would my photography change?  I'd still be walking, looking at houses and people-less streets.  Unless I get a project that would give the camera a real purpose, then it would be useless.

I need to set a new project.

Today's picture is of an old hotel that I believe my mother and father and I stayed in when I was a kid.  The Grand Prix.  That is back in the days when the beach was grand and life in a beach town was a true carnival.  It was fun because we ate at restaurants, something we didn't do at home.  Mom and dad didn't have to get up and go to work.  They wore bathing suits and played in the waves.  They got tanned and smiled more.  My father mythologized and made us laugh.  It is difficult to believe looking at those pictures, but times were different.  We still hoped for proof of the Loch Ness monster or Bigfoot.  The world was bigger, the oceans deeper, the mountains higher.

At least that is how I remember it.
Posted by cafe selavy at 7:22 AM