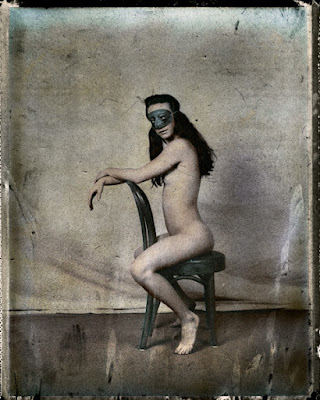 I am stuck.  At the turn of the year, my life changed dramatically, but I have not been able to begin anything anew.  Seven, eight months have passed, and I'm still in the same t-shirt and shorts.  I'm still in the same frame of mind.  There is nowhere to go.  I've been trapped in the weirdest of tides.

Other people tell me about the hazards of being alone, then they go on vacation or go to see friends, or they tell me about the dinners and drinks they are having with wives and children and more.  Not for me.  I am stuck in a silent world of books and music and television, a sort of low security prisoner able to move about freely as long as I don't have contact with anyone.

Both the aloneness and the narratives of others is maddening.  I've had one of my great friends take me off his family group text.  I couldn't stand it any longer.

I shot this photograph in the early days of the studio.  As soon as I saw it, my photographic vision was altered.  I thought it the weirdest photo I had ever seen but couldn't say why.  I simply knew I wanted to make more.

I feel like that photo now, an isolate occupying nothing.

She was a dancer and a dance instructor who had appeared on "Dancing with the Stars."  We kept in touch for awhile.  She moved out of state and eventually there was nothing else to say.  That is how life feels now.  Everybody moved away.  I'm doing nothing.  The conversations dwindle, fade away. I have nothing left to say.

I wrote that yesterday and have decided to leave it.  It is glum, but that is how I feel often enough.  Last night being Friday, I decided to celebrate the end of the work week, to kick off the weekend with a cocktail or two.  Way led to way, of course, and I was not moderate.  It worked its magic.  I slept poorly, woke up in a sweat worrying about the things I seem to worry much about now, got water for my parched mouth, and decided to get back on the wagon.  Herbs and meditation and clean foods.  Oh that I could go to a little hippie shop and load up on beads and ankle bracelets and incense and sage and bandanas. . . .  That always helped in the past, letting my freak flag fly, such as it was.

I've decided to loosen up my restrictions a bit.  I haven't been beautified for almost eight months.  My hair has grown almost to my shoulders.  I have six inches of natural color growing from my scalp.  My beautician thinks I should go blonde.  I can agree to that.  I sent her a text telling her I couldn't wait the year and a half or two years before it is safe to go out.  I need to get beautified.

My new camera came yesterday.  It didn't give me the boost I need.  Actually, it had the opposite effect.  I thought I wanted it more than I did.  I need some balance over here, a sounding board, at least, someone to ask, "Is that really a good idea?"

But it is Saturday.  I will take my new camera out for a ride, so to speak.  It will be something.  It will be really fun.
Posted by cafe selavy at 8:29 AM