Equinox of the Forsaken 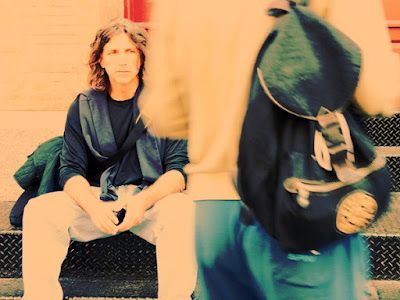 Welcome to the equinox.  The days are getting shorter, and the nights will be long.  I have always loved the intimacy of autumn, but now, alone in the pandemic, I fear the coming of the night.  More dinners alone, more solitary t.v. watching, waiting on the long sleep.

Speaking of which, I had the strangest of dreams last night, so weird, in fact, even I can not bring myself to confess them.  Confess?  Why "confess"?  It is not as if I had any control over their content.  Indeed, I woke very disturbed by them.  Where is my Freud?  I need help this time.  There is absolutely no way to take these dreams literally.  If I did, I would be even more bizarre to myself than I currently am.  Their symbolic meaning, however, may not be any less disturbing.  Fuck, I am unravelling here at the old Pandemic Hotel and Saloon.

Less disturbing but strange, I realized that for years, I have dreamed of living on the upper floor of a great, old Victorian house, the kind you see in New Orleans.  The top floor apartment was huge with an open floor plan, incredibly high ceilings, and giant verandas front and back.  I know I've dreamed myself living there in dreams for many years now, though I have only come to the realization just now.  Many dreams and many nightmares have taken place there.

O.K. I know I am the one who says he DOES NOT WANT TO HEAR about your dreams.  They are boring.  You, however, are surely fascinated by mine.

The weather here changed yesterday.  It won't last, but I was able to sit outside on the deck with a cheroot and a drink comfortably after dinner for the first time in many months.  It was rejuvenating, and the cat was happy.  I prefer sitting out among the wilder things and the fresher air.  There, the mind and the spirit are free.  The drop in temperature enlivened me to the point of productivity, too, if ever so slight.  I grabbed my big Polaroid camera and stuck in a pack of old film just to see.  The film was predictably ruined, but after trying several times, I was able to tease some images from the damaged film, all blues and greens.  The old thrill of hearing the the film pull through the camera rollers, of letting it develop for a minute or two, of peeling the positive from its backing and smelling those chemicals once again brought back many memories.  I still have drawers full of film that was never used, most with chemicals so dried that it is useless, but occasionally one or two will produce half an image or so.  I will shoot up the rest of the film.  What else am I going to do with it?  Maybe I can make something out of those almost images.  If nothing else, it is like being a kid and pretending once again.

In my weather mania, I pulled out the changing tent and loaded more 4x5 film into holders.  So far, I haven't had any of the film I've shot developed, and in truth, I've become confused about what film I've shot and what film I haven't.  I have two boxes with sheets of film I think I took from the holders, but there are three different kinds of film in them.  You can tell that by the cut ridges on the bottom of the film.  I can feel that they are different, but I only recognize two of the types.  The third. . . ?  And I am not sure if they are blank films or if I have shot them.  I am not well organized as I have confessed so many times before, but now I am even more forgetful.  I have to devise a system.

But it is no matter, really except for money.  They have all been simple test shots anyway and not of anything creatively important.

I have kept a ritual for many, many years now that must be performed today with the changing of the seasons.  I have two heavy quilted comforters for my king sized bed that I bought years ago at Pottery Barn.  I bought one that is a shade or two lighter than forest green.  Later, the comforter went on sale, so I bought another in burgundy.  They are beautiful, and each equinox I change them out, green in the spring, burgundy in fall.  It is very weird to me, though, realizing that I am now switching back to the burgundy comforter that was on the bed when Ili was here.  It has been a long time, I am made to realize, but I have been living in a time warp of pandemic making.  Nothing has happened since I left my job.  Every day is exactly the same, or near enough to proclaim it.  It terrifies me to think of the time lost with more in the offing.  I am lazy.  There are things still in the places that Ili put them.  My movements are of a pattern.  The house remains much as it was.  It is like living in a museum.  Maybe I need to make a wholesale renovation.  I mean, really, the same towels are hanging in the guest bath where she put them.  Cabinets and cupboards are as she arranged them.  Drawers still hold some of her things.  I move in grooved paths without disturbing much at all.  I don't even sit on her side of the sofa.

I guess it's odd.

Let me suggest, however, that the weather holds great promise for productive change.  Maybe not "great," but promise, at least.  My mind feels nimble, my core energized.  I mustn't expect too much, of course, but any positive change will be welcomed.

It is autumn.  I need to make the most of the season.