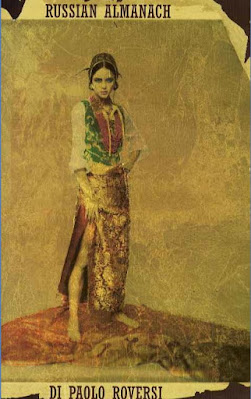 This photo used to be the screen saver on my computer.  For some reason, out of the blue, Q sent it to me last night.  It was never made clear why.  Funny enough, I had been going through old hard drives yesterday trying to find the lost "Lonesomeville" files.  I am, and they are, an organizational mess.  Old files, old computer desktops, everything I had, are just dropped into storage without sorting.  I open one folder and there are twenty more.  I open one of those, and again, more files.  Inside each file is a hodgepodge collection of images.  Many of the files are misleadingly or wrongly labeled.  Some are merely labelled with dates.  I spent the entire afternoon reliving the past, in a way, as I looked through images I haven't seen in years.  Here is one of the proto-Lonesomeville Polaroids when I was just learning how to manipulate them in the manner that would define my style for a couple years. 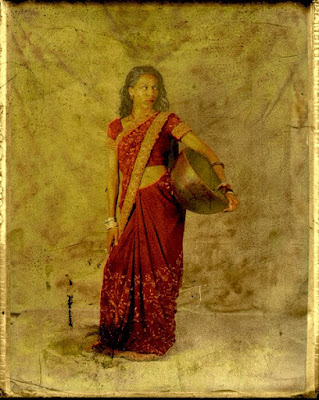 How amazing is that?  What causes such coincidences?  I had never thought about these two photos together.  As a matter of fact, I always wanted to figure out how to do what Roversi had done.  I am pretty sure I made my image before Roversi made his.  Maybe he copied me.

It wasn't a wasted day so much as an indulgent one.  I mainly looked at images without reorganizing the mess.  I was simply being prideful most of the time.  I found old images of myself, too, which filled me with an abundance of conflicting emotions.  There are not many photos of me extant.  Nobody ever thought to take them unless I asked.  The majority of the images of me are ones that I took in reflections.  Go ahead and apply your own theories about all that Freud.

Soon enough, the afternoon was gone.

I did find what I was looking for, however, so the day was not a total waste.  Just a rabbit hole.

A few days ago, I wrote a reflection on an op-ed piece that opined that people who are going to vote for Trump do not like Trump, they just hate the people who hate him.  I've realized without too much need for reflection that the same is true of those who will vote for Biden.  Nobody wants either of them to be president.  How crazy is that?  We live in a country where nobody is voting for but everybody is voting against.  My animosity toward stupid is growing daily.  I heard interviews with Trump supporters at a rally last night.  When asked why they weren't wearing masks, people said that there was no pandemic, that the entire thing was a hoax and an attempt to bring down America.  How in the fuck do you deal with that?  My Trumper friends would point to interviews done with Biden supporters that are equally dumb.

I blame social media.  Give an asshole a microphone. . . .

My tree guy stopped by my house yesterday.  Yea, I have a tree guy.  He's from Indonesia.  He's done my trees on a number of hurricane occasions.  He likes to stop and chat from time to time, but I haven't seen him or his trucks forever.  I figured that he took the money he made from me and retired.  Yesterday, however, he explained that he had gone to Cuba at the beginning of March to see his girlfriend, and then the pandemic lockdown happened.  The government made all foreigners in Havana go to a hotel where they were quarantined for a few weeks.  Then they moved them all outside the city to another hotel in the east.  It was very nice, he said, and they fed them three times a day.  But international flights were stopped, and then, inexplicably, the airport was shut down completely.  He said that while he was there, he bought another house, a piece of property outside Havana.  He does this through his girlfriend's family.  Finally, just a week ago, he was able to leave the country.  He was stuck there for all those months.

I then told him my tale of woe, told him that Ili left, then I retired, and then the pandemic.  He was very sorry to hear about Ili, he said.  He liked her, but "it is very difficult with women.  You never know for sure."

I asked him how they did with Corona in Cuba.  He said they had it totally under control.  When the government makes rules, you either obey them or go to jail.  People did exactly what they were supposed to do.

"If you want, we can go to Cuba.  My girlfriend is a surgeon and she has many nice friends."

Now there's a thought.  I could even buy myself a hacienda in the mountains overlooking the coast.  Hell. . . he may be onto something.

When I went to visit with my mother, I told her the story.  She was amused and said, yea, there is that.  I told her that I had reservations about such things.  I've "dated" women from other cultures and found some discomfort in the unfamiliarity there.  Many do it, I know.  Thailand is full of old American men looking for. . . whatever they are looking for.  But I am a romantic.  I'm not ruling anything out, but, as always, I'm not looking, either.  Still. . . in a tip of the hat to the exotic, I ordered takeout sushi. 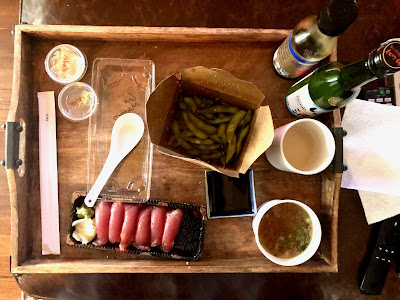 A romantic dinner for one.  I stopped and got two nice bottles of unfiltered sake to keep me company.

Maybe tonight, I'll watch a movie about the bad old romantic world of the past where things were wrong and everyone suffered.  Perhaps "Farewell My Concubine" or "Indochine," or "The Lover."  Maybe "The Year of Living Dangerously" would be more appropriate.  But I haven't seen "Mongol" since it was in theaters.  There are choices.  Movies alone.  I'd better plan my menu now.  I can't afford another night of sushi.