I Guess I'll Have the Rat Poison 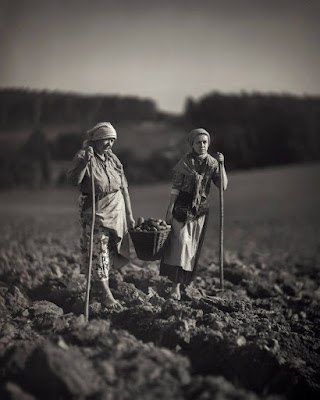 I don't have any new pictures to show, and I've been letting that stress me out.  I've realized, however, that you don't need to see photos by me every day.  I've been putting up pictures of houses for god's sake.  Now I know that we all love the more honest portraits, but we are living in scary times.  I read an article on the case against Ghislaine Maxwell this morning.  Prosecutors maintain that she is guilty of enticing, grooming, and recruiting.  Minors, of course.  If they were older, it might be called "enabling," but that's just me.  Prosecutors say that her boyfriend, Jeffery Epstein, "escaped justice" and vow this will not happen again.   Wow. That's a wild one.  Put someone in a dank cell and let roaches and rats climb over him and keep him isolated until he decides to strangle himself and call that an escape from justice.  And that was before he was found guilty of anything.  This was simply foreplay.  But that is nothing in William Barr's world.  I didn't think there could be a worse person holding public office than Donald Trump, but Barr has shown me the error of my thinking.  Trump may be stupid and evil, but Barr is diabolical.  It scares me to think that he could replace Ginsburg on the Supreme Court if things go Trump's way.  Now don't get me wrong. I'm not holding Barr accountable.  You could make an argument that Jeffery Dahmer was a worse person, but the entire Republican Party wasn't supporting him.  I'm not talking simply about politicians, but about the entire Republican base.

It gets complicated for me when I think about it.  If Jeffery Epstein were to run agains William Barr for public office, which one would I choose?  Sounds awful, right?  But that doesn't seem an unreasonable scenario in the world I find myself in.

I know you don't watch the six o'clock news every night like I do.  I know that.  So I don't expect you saw Ari Melber's little video extravaganza on "The Beat" last night about undecided voters.  I've scoured the internet and can't find what he showed.  I can only find this: 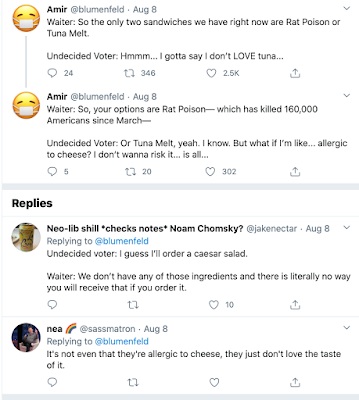 Sounds about right.  Even the liberal panel was like, yea, Biden is a tuna melt.

Liberals, or whatever it is that passes for "liberal" anymore, have to stop saying that "the people understand that. . . ."  Plug in anything there from something about coronavirus to Trump's lying.  It doesn't matter, really.  Whatever you put in there, the statement will be false.  "The people" are who put Trump in power.  "They" don't understand much of anything.  I'm not blaming them.  Shit be hard, dude. Work all day, put in overtime, come home, have a beer, watch "The Simpsons," smoke a joint and go to bed.  It's a hard life.  On the other side, you have people who pick up their government "disability" checks, get their food stamps or whatever they use now, down their pain killers, watch "Duck Dynasty," smoke a little heroin, and go to bed.

The world is not made up of people microdosing LSD and working in Silicon Valley.

Speaking of which, I have become fascinated by this.

There is a whole series of these films from the 50s, back when they could give LSD to June Cleaver just to see what happened.  These were not hippies looking for a spiritual journey or a way into another world.  These were people who said, "Sure, doc, let's try it and see."

It is important to note that Cary Grant did lots of acid.  He loved to trip.  He said it saved his life.  Apparently, it led him out of depression.  He gave it to his wife, Dyan Cannon, and she freaked the fuck out.  She said he was trying to kill her and divorced him.

I wish it had been filmed.

I'm a bit of a drug weenie.  Drugs effect me in strange and unpredictable ways.  Muscle relaxers jack me up.  So does Valium.  But I can't take an entire Xanax and marijuana paralyzes me and makes my heart race. I would like to try acid, but I'm afraid I'd never come back.  I want to try a micro dose first, just to see if I get a little zippy, but I don't have any reliable dealers in my life, so that has not been a real option.  I'd need to go to a tech company and ask around if I really wanted some, I guess.

And so. . . the photograph was taken with an 8x10 inch camera and an antique brass Petzval lens.  Working with the 8x10 camera can really take it out of you.  They are burdensome to use, though that is what all the early photography was made on.  I often think about buying one of those expensive old lenses, but then I would have to use my 8x10 more, and that is daunting.  I sent that photo to Q last night, and he seemed fascinated, so I sent him a link to a company that makes 8x10 starter cameras cheap.  It is, I think, a gateway drug.

Speaking of Q, last night I finished the Paris Hilton documentary (link).  It was torturous to watch.  Just horrible, and I wouldn't suggest it for any of you who did not fall for her and her sister, Nikki, when they were kids.  Even I now find her disgusting, and I thought that could never happen.  But last night, I finally got the inside dope on what dj-ing and raving is all about.  My only experience with that was in NYC at Q's 30th birthday party.  I was surrounded by pretty girls eating ecstasy out of Pez dispensers all night, so I didn't really pay attention to what Q was doing, and no matter how he tried to explain the intricacies of it, I never got it.  I mistakenly referred to deejays as disk jockeys which didn't go over well, but the only deejays I'd ever seen were at weddings where the penultimate moment (and yes, I am using the word correctly) came when they played the Village People's "YMCA."  But last night, at last, Paris gave me the insight I was lacking.  And she should know.  She gets paid a cool $1,000,000 per show.  I don't think there is a more successful deejay in the world.

This is pretty much how DJs roll. And remember--this crowd votes!