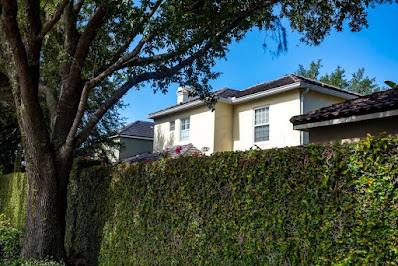 I haven't anything to say.  I haven't any pictures to illustrate it.  There is no embarrassing wealth of riches here.  I have time but no inspiration, and even time seems to be in shorter supply.  I lose an hour at the beginning and the ending of each day somehow.  I can't explain this.  No matter how early I get up, my life seems to begin later than it used to.  In the evening, it is suddenly time for bed.  In between, I just get tired.  Some exercise, a trip to the grocery store. . . I don't know.  Life, I'm sure, is different elsewhere, perhaps on the other side of that wall.

I've become too good at self-isolating.

Without social media, something I shun, I am out of the mix.  I haven't any idea of what people are doing or saying other than what I see on the six o'clock news.  It seems terrible.

But then I drive by Country Club College.  Students returned to campus this weekend, to the residence halls, to the dorms.  The place looks like a giant ant farm. Everyone is required to wear a mask while on campus, so the kids are pouring out into the town like the buildings are on fire.  The state allowed bars to open yesterday.  I wonder if the kids will go?  My own hometown will be the Covid Capital of the World in a few weeks.  Having pocketed the bed rental money, the college will be able to send the kids back home.

Am I being paranoid?

I should not drive by.  It is bad for me.  I have not seen so many six foot legs in a long while now.  They all seem to be perfect specimens in their six inch shorts.  It makes me feel round and fat and puffy.

Which reminds me.  "Cuties" is apparently not a good film and is child sexploitation.  I read that.  Both the left and the right agree (which reminds me that they have become mirror reflections of one another).  Apparently, the the real life kids in the movie had whores and pedophiles for parents.  They will surely join Rose McGown for a roundtable discussion on either Fox or CNN in the near future.  I don't want to get into trouble, so I will go back and retract yesterday's post.  Netflix is predicted to remove the film from its catalog very soon.  Vigilantes left and right have taken to the streets.

We need to get back to real entertainment like "The Donna Reed Show" and "Father Knows Best."  There lay the bones of thoughtful entertainment.

What ought to happen is that the proper authorities get a test group of men and attach sensors to their nether regions and then screen "Cuties" to see how they react.  Oh, wait. . . there have already been studies done on that topic.  You don't want to know the results.  As Trump points out, you can't trust the science.

That's what he said yesterday about climate change.  He's got a better idea.  It's going to get cooler.  Wait.  You'll see.

That's what we have been doing for over half a century now, waiting to see what happens.  There is no end to waiting and seeing, it seems.  There is never enough data for the dumb.

But how do you tell Trumpers that?  I insulted my mother yesterday telling her that people too dumb to understand how government works shouldn't be allowed to vote.  When mechanics are working on an airliner, I don't step in and tell them how to fix it.  I wouldn't feel comfortable having the surgeon stop in the middle of a surgery, turn to me and ask, "What do you think I should do now?"  My mother hasn't a clue to how governments are set up, what powers they have and don't have.  She doesn't know who her state legislators are, what the role of the county government is.  She is just like Trump.  But I could see that I had hurt her feelings.

There is no doubt that it all our public systems have gotten to be too complex.  There are over a million law enforcement agents in the U.S., but there are over 1,350,000 lawyers.  True statistic.  More lawyers than cops.   Look it up.  The number of attorneys is growing exponentially each year, yet no one is marching to defund them.  Trump loves attorneys.  He loves the courts.  He knows he can tie almost anything up indefinitely in the convoluted partisan system we have.  Even attorneys don't understand it.  I was almost married to one for a long time.  She was smart and good in her area, but when we would watch the news, she would most often say, "I don't know that area of the law."

She was pretty, too.  Did I mention she was good in her area?

But yes, things have gotten too complex for laymen.  And maybe it just pisses people off.  And maybe they just transfer that frustration onto science, too.  The complexities of life  have become overwhelming.

Perhaps we should return to fables and to tales.  Paul Bunyan.  Johnny Appleseed.  The serpent in the garden.  The daughters of Lot.

I will make it up to my mother today.  I will ask her advice on all the things I don't understand.  That's the deal, you see.  It is difficult not to act like an arrogant prick.  I know this, but I don't know that.  I will ask her about "that."

One area all people seem to be confident experts in, however, is morality.  They know right from wrong.  I don't know how, but they do.  They feel qualified to tell me how I should feel about things.  I mean everything.  "But where do you find these truths?" I ask.  "Where are these inscribed in the cosmos?"

"Well that's the beauty, you see.  It is not as if you have to be trained for years to know this stuff.  You just do.  And we know that we are right and they are wrong, and that is why we are better than them."

"That is why we are better than they, not them."

"What the fuck are you talking about?  That sounds weird."

"O.K. That is why we are better than they are, not than them are."

"Whatever, dude.  There is something wrong with you.  You're really fucked up."