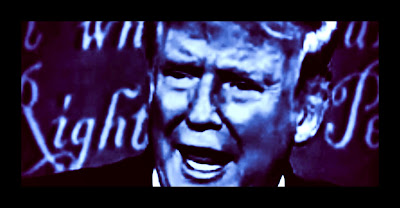 (photo by the drummer of the band)
Well, if you didn't watch it, you will never know.  The horror of the thing cannot be adequately described. Not nearly.  The country was insulted and disgraced by this shit show.  I was surprised after I had written that to a friend that this exact phrase came out of the mouth of Dana Bash in the first few minutes of CNN's after debate analysis.  I was shocked to hear her say it, though she was absolutely right.  Unlike me, she will be remembered for this forever.
You can read all about the debate elsewhere.  There is and will be endless analysis.  I am not going to do that here.  I am just going to say that the difference between watching it and hearing about it is the difference between hearing about being attacked by a bear/alligator/lion and actually being attacked.
Nobody wishes to be attacked by a bear/alligator/lion so they can tell the story.
I had been happy all week.  I hadn't watched the news.  I felt myself gaining some much needed composure again.  Then this.  I had nightmares all night long.  I woke again and again throughout the night, depressed and panicked.  I thought about things I shouldn't.  I was lonesome and in despair.  When I wasn't thinking, I was locked in a nightmare world where Trump had taken me to the Arctic for some reason, and I didn't have warm clothing.  You will think I am making this up, but it is the absolute truth.  I wanted comfort, but she left long ago.
I tried to center my thoughts.  I thought about the theory of religion (I've started reading the million paged tome).  I thought about doing the documentary on religion that I have had in mind for years.  I thought of becoming an ascetic.
Nothing helped.
This morning I am hungover and sick with it all.  And I'm depressed.  Not by the debate, but by my life.  I thought I had withdrawn from the world through lockdown, but I am engaging in it more than I realize--through television, through texts--and it is wholly unsatisfying.  It is worse than that.  I have become resentful.  I am tired of envying the lives of others and of being snubbed by their opinions.  Walking through a world of strangers was much easier, those temporary engagements that brought insight rather than mere jousting, now impossible.  Instead there are the claustrophobic attempts to establish and maintain cyber relationships through fatuous Zoom meetings and witty texts.  Even here in my own blogosphere, I trouble myself with failing numbers, desperate to hit the right notes, wishing to please, if now swell, the crowd.
WTF?
Today (I hope) a better, more meaningful isolation begins.  It is not about being contained by the walls of my abode.  In truth, I have a luncheon date with my former secretary at noon.  No, it is not about physical withdrawal but an emotional and intellectual distancing until I find some peace.  I can't keep being pissed off or resentful or depressed by the things I can't control.  I am not isolating, really, but disengaging.  Perhaps that is the better expression.
Call me Swami.  Mahatma.  Whatever.
Earlier in the day, before the debates, I bombarded my friends with information about this. 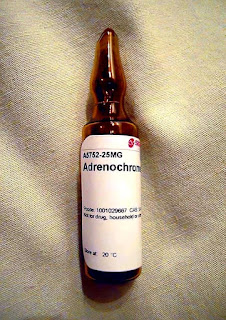 If you don't know, it is the drug behind the QAnon Conspiracy Theory.  I went down the internet rabbit hole yesterday.  There is some real crazy shit out there.  This is Trumpworld.  What do you do with crazy? Try to get it to see reason?  Speak quietly and calmly until it goes away?  Your options are limited.
But yesterday was my last mania, I think.  Very few of my friends are engaging in the world "out there" any longer.  They are doing what old people do, retreating into non-controversial observations and memories.  Even my younger friends seem off-put.
I, the eternal pessimist, must learn to love Candide.  Perhaps that was not Voltaire's intention in writing the book, but as naive as Candide was, he was content to reside in his garden.  As for Voltaire?  The apocryphal (and non-factual but perhaps truthful) tale says that at the end of his life, when asked by the priest to renounce Satan, he replied, "This is no time to make new enemies."
Posted by cafe selavy at 9:23 AM