The Glory of Cleveland 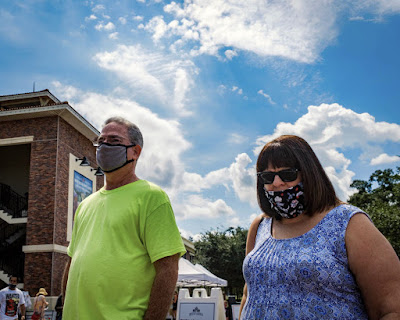 Again, the Times (and others) are following this blog and following my lead.  Trump's tax news is not likely to make a difference in the election.  The Times even drills down to something I said yesterday--the tax loopholes were made so the rich could stay wealthy (link).  The Onion had a great take on it, too (link).  Fox News thinks that everything in those tax forms is above board, and so do their viewers.  And as I have been saying for a very long time now, there are many, many secret Trump voters who are not willing to come out and be shamed by relentless ideologues (link).

O.K.  So you don't have to be a genius to have figured all of that out.  But I will claim prescience.  Like blind Tiresias, however, I find telling the truth does not garner me any kudos.  That's o.k. I'll cary myself on my own shoulders a few times around the block.

Tonight should be a real hoot.  How can you look away?  Two drooling geezers going at one another for what will seem like an eternity.  We know what they have to say.  There will be no surprises there.  But who will be the wittiest, the more clever. . . the real showstopper?

They will both be jacked to the gills on Adderall and Ephedrin.  Surely one of them will shart if not shit himself altogether.  That is all one can really hope for.  But as both will be wearing adult diapers just in case of such an event, we will probably never know.

My across the street neighbor is a retired surgeon and a fairly conservative fellow, though I know little about his politics.  Yesterday, however, he put a campaign sign in his yard. 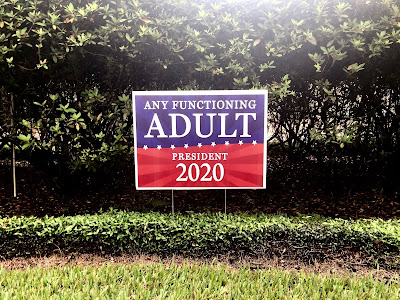 I sent this to some friends, and one, a male ecofeminist and theorist, said that one of my ex-employees, an AOC kind of gal, had put up this. 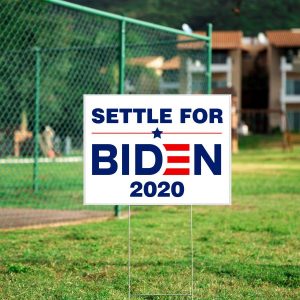 What are you going to do?  If Trump wins again, it will be due to people of her ilk.  The vote will be razor close in my own home state which is needed for a Trump victory.  The ideological left can make the difference in this election--one way or another.  They did in the first Bush victory, choosing to vote for Nader instead of Gore.  I'm not 100% certain she won't sneak a vote for Kanye in the end.

One has to wonder at the weirdness of things.  I mean the Notorious ACB has been grabbed by the pussy.  How can she, a successful jurist and righteous Christian, take the nomination from a godless heathen like Trump?  Oh, I know.  Sure.  But the irony rings loudly.

Of course, she is dedicated to the Old Testament's decree that a man is the head of the household.  It should be fine.

Our friend Q and his family are being driven from their home by the Glass Fire.  He wrote to say they were packed and leaving in the morning.  They will be safe, but what a thing knowing you may come home to ashes.  He, like so many others, is ready to abandon California.  I don't think, however, he is ready to come back to the Hurricane State.  He has been away from this redneck cracker madness just a little too long (link).  It requires a special and practiced kind of ennui to inure yourself to such neighbors.

O.K.  I've got to get ready for tonight's big debate.  Cheap beer, potato chips, and Popeye's chicken, I think.

And adult diapers, of course, for I am certain that at some point, I am going to shit myself.