More than One Question, Myriad Answers 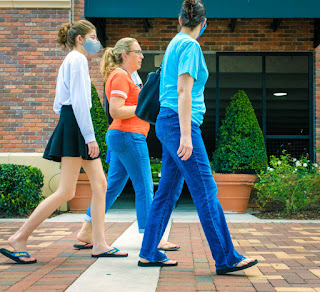 The day has not started well.  When I went to put the milk in the coffee, it came out in chunks.  I had to resort to a two year old container of non-dairy creamer that was hardened.  Thank god those chemicals never go bad.  They have a half life of 40,000 years, or so it seems.  That was after a third night of not sleeping.  It is getting worse.  Last night I woke at 11:30.  Then 12:30.  Etc.  Up and down all night long.  Maybe I should blame it on the Borat movie.  I watched it last night.  I've decided that Cohen's entrapments are no longer funny.  Fifteen years ago, they were shocking, but now I find it shocking that he continues.  If there were a fair mix, if he were entrapping BLM or liberal dems, it would seem more legit, I think.  But to imply that only conservatives are stupid and corrupt seems unbalanced.  How funny would it be to see him get over on Biden or MLK Jr.?  I'll bet his audience would be outraged.  Going into someone's house and shitting on their dining room table is neither comedy nor political satire.  In the end, I thought the movie was a comment on Cohen himself.

O.K.  I laughed at a lot of it, but I was alone in my own house.  I'm not perfect.  I'll admit, too, that the non-dairy creamer wasn't that bad, either.

The sleep thing, though, is wrecking me.  I haven't had a drink in a week, nor have I had a good night's sleep.  I like drinking.  It is a good way to end the day, I think.  But many of my friends have stopped and I decided I didn't wish to be the first one to die because I drank.  I don't want to be the last one, either, but I sure don't want to be the first.  I miss, however, uncorking the bottle of wine to begin the dinner prep.  I miss a lot of other things, too, like laughing and hugging and sharing the chores, especially the after meal cleanup.  Yes, there is much I miss, but it is all more palatable with wine and after dinner whiskey.

My expanding waistline, however, was a concern and an indication.  And I do feel better during the day, but as I often quote, the night's another thing.

As I feared, yesterday was not as much fun as the day before.  I followed the same routine.  I went out for some exercise, then worked for three hours picking weeds.  That is what I thought.  The lying clock said it was only half an hour, but it seemed more like three.  I showered and made a healthy lunch and almost sat down to the computer but saved myself just in time.  After lunch, I went to a nursery and bought weed killer and new plants to pot where the old ones have died.  And I got some wildflower seeds, three different types, and put them 1/4 to 1/2 inch deep into the ground all around the small garden.  Perhaps I will have a something growing there in a couple of months.

I went to the grocery store, having decided not to get a takeout meal this Friday night, and while I was there, I went to the pharmacy and got a Shinglex shot.  I had chickenpox as a kid, and I've known several people who have suffered with shingles, and I've been meaning to do this for awhile.  After I got the shot, though, I felt tingly and tired.  Perhaps it was the shock of having to pay $160 for it, I don't know, but when I got home, after putting away the groceries, I collapsed into a chair and closed my eyes for half an hour.

What strange images were projected on those shuttered lids.  My mind seems a Curiosity Cabinet of late.  It entertains and enlightens me with the weirdest of things.  I've tried hard to become a learned man.  Is this the inevitable result?

I bought some things for my mother at the nursery and delivered them at my usual hour.  By the time I got home, it was Friday night.  I tried to psyche myself up with a Kombucha, but there was really no luster to it.  Spaghetti and broccoli and the news, almost.  Other than the BBC, the news outlets have begun to treat us like idiots who can't remember how or what they opined about the evening before.  I took in a couple minutes of it, then turned it off.

After dinner, it was time to check the day's inbox.  Surprisingly slim.  Without my constant input, the chatter is much reduced.

After I finish this and a few missives, I am going back to the existential world.  I still have lots of yard to weed and now plants to pot.  As the Covid World gets ready to isolate again, in a world without people, I have been thinking of setting up a photo space for objects, a small studio for entities both strange and familiar.  I ask myself over and over, "Why?  What's the point of it?"  I don't have a good answer.  Photography in almost every form other than the selfie is being villainized.  Such attitudes compel me to make dangerous photographs, you know, for the crowd is always vicious and wrong, and it is important to travel in the opposite direction.  But it is literally (not virtually) impossible at present.  So. . . what is the point of making a studio for picturing objects?

I don't know.  I really don't.  Maybe it is just that I have spent all this time and money and have all the equipment and fell the need to do something with it.  Or maybe I think I will figure something out about the inanimate world.

I will end today with one question that you only need to answer to yourself.  Given that today's photograph is a pretty poor one and not worthy of attention--given that there are no guiding vectors and that the composition is a random mess, poorly cropped and themeless--after eye-scanning the picture, what becomes the center of your attention?  Why?  Is your final answer intellectual or visceral?  Is this a product of the photographer's intent or a reflection of your own imagination.

Oops.  That is more than one question.  I guess I got carried away.

O.K.  The birds are chirping and the band is playing.  It is time to go get visceral once again.