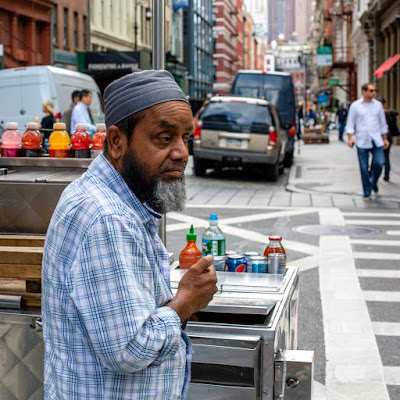 Let me be controversial for a moment.  My phone and computer inform me that today is "Native American Heritage Day."  O.K.  Cool. But who in the hell thought to name it that?

"What?" you might ask.  "Are you against Native Americans?"

Well, I know what you mean, but think about that moniker for a moment.  It says that a group of people were Natives in America.  The whole concept of "America" is a European invention.  The people who lived in what is now called "America" were not Natives of that land.  Indeed--Natives?  They were a group of Asians who crossed the Bering Land Bridge and came into a people-less place they never called "America."  And they weren't a cohesive body.  The brutalities of one faction or tribe against another. . . well, I mean, they had slaves, didn't they?  Is that the "Heritage" about which we are speaking?

But if there are any people who deserve something special in America, that European invention, they are of African and Native Americans.

But you know, when the Swedes start paying reparations to the Norwegians. . . at least according to my Norwegian friends.  Sort of like "Native Americans," right?  Weren't they all Vikings?

O.K.  I've steered WAY out of my lane and knowledge base here.  Just pick a side, I guess.  Everyone's heritage is pretty terrible when you look at it.

So let me sway back to something experience based--my Thanksgiving day.  It was O.K.  My mother and I did what we set out to do.  I set up the table outside, put on the table cloth and what passed for the ice bucket.  It turned out, however, that heating the Whole Foods meal was a bit of work, more than my mother had intended on doing.  Still, it was only heating, so I made mimosas and we sat down and soaked in the beauty of the day.

My mother managed to burn up the green bean casserole--one down--but she opened a can of green beans to make up for it.  I tried carving the turkey which only served to prove to my mother that the money she had spent on my B.S. degree in Zoology was wasted.  Still, we got everything plated and served and sat outside to eat.

When we were finished eating, it was very obvious that we had not eaten half of the dinner for four, yet we both were stuffed.  There would be piles of leftovers for later.

Having cleared the table, we sat back to relax.  And that is when people began to show up.  Neighbor after neighbor.  Corks were popped and the rivers of champagne began to flow.  I had gotten bottles of Veuve Clicquot, not impressive but good--ish, and much better than the Freixenet that lot would serve.  My mother's 96 year old neighbor came over, cute as a bug in a sweater with a holiday flamingo on the front, and had a glass, too.  She is very thin and elegant but also very deaf, so conversations take some strange turns.  At one point, she said she had never bought a bottle of champagne, and then she asked me if I drank.  I said maybe a little.  She said, "Sit tight.  I'll be right back."  When she came, she brought this. 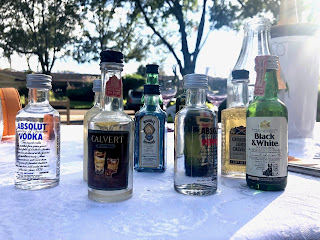 It was her stash of airplane liquor bottles.  Her husband had died many years ago, but she still had his bar intact.  She had a piece of paper on which she had written down the contents of the bar in a precise hand.  All of the bottles were labelled "3/4" or "1/2" meaning they had been opened for a very long time.  She asked me if they were any good, and I told her probably not, so she said she would dump them.  It was very sad to me to think of her dismantling the bar she had shared with her husband who by all accounts was a very interesting man, a career Air Force officer who had flown in WWII as a bombardier.  I was touched, however, by her gift.

Having had enough champagne for the day, I opened the little bottle of Calvert, a blended whiskey.  You know. . . it wasn't all that bad.

When the neighbor left, my mother began the final clean up and division of leftovers.  That done, we sat down for a final moment as the sun began its daily retreat.

At home, I decided to take a hot Epsom salts bath having pulled a muscle in my back earlier in the day.  I soaked in the tub until I could soak no more, then dried and poured myself a scotch.  I do not usually spend so many hours drinking, and I told myself, "Tomorrow, we begin a new healthy regimen.  Nights will be full of herbal teas."

Yup.  That's what I told myself.  Then I turned on "The Crown" and watched two episodes, then took an extra powerful pain reliever and a Xanax and went to bed.

Mr. Fixit won't be here until tomorrow, so I have another morning to myself and a free day.  What to do?