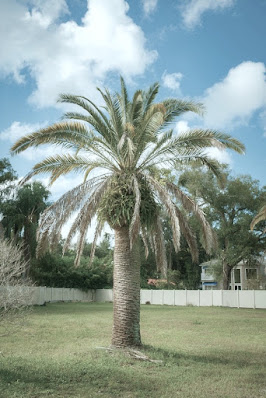 I realized yesterday that Thanksgiving is only two weeks away.  The holidays are here.  I drove by some decorated trees and was reminded.  It doesn't seem anything like the holidays, does it?  It is not like any I remember.  I was in Detroit about this time last year.  It snowed.  What happened to the time in between?  We are living in a minor apocalypse.

I guess.  Maybe it only seems that way if you live alone.  The vast majority of you do not.  Maybe there are holiday vibes in your lives, preparing for Thanksgiving dinner, buying Christmas presents, watching winter shows.  What do I know?  I'm a monk living in a cave with a magic box that brings me entertainment.

C.C. knows something about me.  He told me to watch "Wayne."  He said the girl in it would remind me of Emily.  Jesus Christ, man, what evil do you want to release?  I'm halfway through the series.  I had to Google the actress.  She is not really fifteen.  Still.  WTF?

Maybe it is the paint fumes.  Maybe it is the stress.  I don't know.  But I decided I would post on the tribute page of Emily's funeral home tribute wall.  When I did, I found you could upload a photo, so I attached her picture.  When my message posted. . . holy shit. . . it was HUGE!  It was as big as all the other tributes combined, and for some reason, my words were underlined.  The photos barely fits on the computer screen.  A rush of adrenaline shot through me.  There was no way to remove it.  Holy shit, holy shit. . . .

I thought, in for a penny, in for a pound.  Maybe I should turn the page into a tribute blog.  I could write every day and post small samples of the letters she wrote. 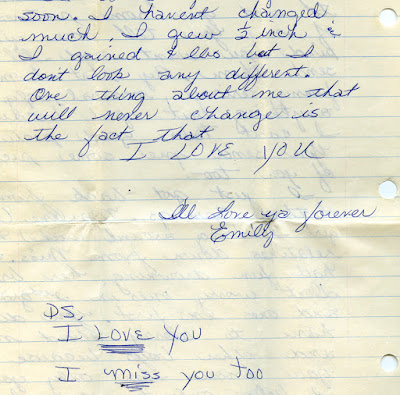 The absurdity of it had me on my knees.  I hadn't laughed all year, it seemed.  It would stop then start again.  I texted c.c. my plan.  Oh, fuck.  I could barely see the tears of laughter.

Oh. . . I just remembered what I thought to write about today.  Emily Harrington is proclaimed to be the first woman to solo free climb El Capitan in under twenty-four hours (link).  I am confused by the claim, however, for my almost girlfriend Lynn Hill did that in the 90s.  My Yosemite climbing friend was on the face when she did it.  I've told the story before, but he and his buddy took a couple days up the wall and were sleeping on portaledges overnight, cooking, eating, and, of course, pooping.  When he topped out on the climb, he called me.  It was an accomplishment, but what he wanted to tell me about was his encounter with Lynn, who I claimed fell for me as I had predicted she would when I met her in Utah at an outdoor retailer convention.  I was in my 30s then and much more confident than I am now.  A friend was in the room when she did the double take.  "Did you see that?" he asked me.  "Sure.  I told you."  My climbing buddy said he had thrown his shit bag and it almost hit Hill.  When she climbed by him, he said, "Hey. . . you're Lynn Hill.  I think you know a friend of mine."

So yesterday, I sent him the article and asked him how they could claim that Harrington was the first.

"She was the first! Back in the mid 90's. I know. I hit her with my shit bag from camp 5 on the Nose. She was below the Great Roof. The next day she passed me while we chatted about the crush that she had on you. And the book that you recommended. You're a good man!"

I had to Google it.

“Carolynn Marie "Lynn" Hill (born January 3, 1961)[2] is a U.S. rock climber Widely regarded as one of the leading competitive sports climbers in the world during the late 1980s and early 1990s, she is famous for making the first free ascent of the difficult sheer rock face of The Nose on El Capitan in Yosemite Valley , and for repeating it the next year in less than 24 hours.” 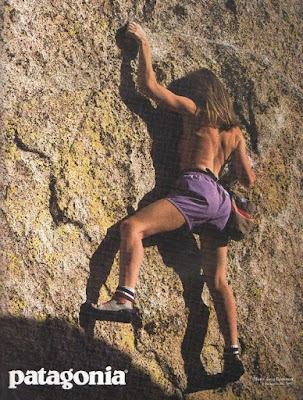 Here's my girl climbing topless.  This is the prudent photo.  There are many of her climbing nude.  Those were freer days for some, happier and less constrained.  Or so it seems.
Posted by cafe selavy at 8:17 AM