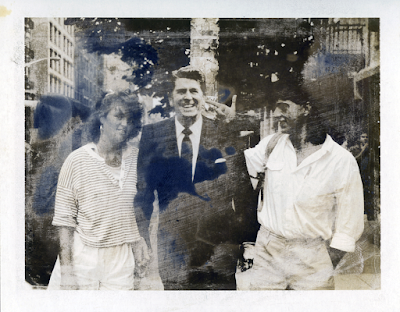 Mr. Fixit kept working.  The rain kept falling.  I opened a garbage bag full of letters and began to read.  There were hundreds of them.  I read things I had forgotten.  I became uncomfortable.  The letters were from two women mostly.  I found some notes from women I could not remember, too, but most of the letters were from a most unsettled time in my life.  I made mistakes that I have refused to make again.  I have quit reading them for now.  I just can't.

The house is a wreck.  Every room is in disarray.  But in the main, the walls and ceilings have been repaired and much has been painted.  And still there is a long way to go.  Mr. Fixit has to take off the next two days but will be here through the weekend.  I am in a constant state of anxiety.  Anxiety and flux.  I only look forward to the evening's peace, the darkness, some reading and t.v.  All thoughts of making pictures or music have been waylaid.

The rain continues to fall.

I found this photograph in the garbage bag of letters, an old Polaroid from a street vendor.  It was the sort of Polaroid that needed to be wiped with the little squeegee of fixer that came in a plastic tube with the film.  The vendor did not do a good job and the photo is fading into non-existence.  I barely remember the photo now, even looking at it.  The 1980s.  Manhattan, I think, but I am not certain.  The photograph is evidence of something, but I am not sure of what.

So much of the past becomes confused or forgotten.  I sat with my mother yesterday talking about family things that I don't know.  She didn't either.  There may be some way to find some answers, but probably not.  It is shocking to me that I do not know the name of my paternal grandfather.  Neither does my mother.  Her ignorance in this is more shocking to me than my own.  Neither of us know when he died.  I only met my father's mother once.  There is a picture of her holding me as an infant.  She died at the farmhouse kitchen table at the age of sixty, an apparent heart attack.  It was said her husband became paranoid after her death and slept in a chair with a rifle across his lap.  Was it murder?  The old farmhouse was reportedly haunted, the one foot thick walls torn apart after her death as if someone was searching for hidden treasure.  There are no survivors who can tell these stories.  I am left with gaps and partial rumors.

I have had no luck yet at finding out how Emily died.  I want a magic camera that will make photos of what has left, of what is gone.

That Polaroid is emblematic, perhaps, of the difficulties in understanding even a personal history.  A photograph can become a sliding signifier detached from what it was or meant.  Histories are fictions full of promise, signifying nothing.  I am haunted by voices I cannot make out.