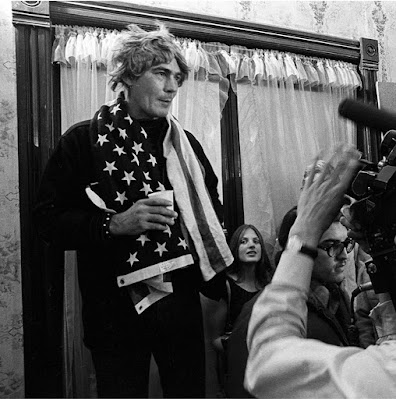 "You won't have Dick Nixon to kick around any more."

I assume there is a big hangover today.  The nation was kicking it last night.  Even Fox has declared Biden next president.  I am happy that Trump lost.  Now, however, we have the compromise and the political shit has already hit the fan.  AOC is being blamed for the closeness of the election and the loss of several house seats.  She is blaming back.  I celebrated.  I even watched Harris's and Biden's speeches.  I watched CNN/MSNBC/Fox leading up to it.  Apparently this was a race for the Vice Presidency.  That is most of what the liberal media talked about.  Fox, too.  Biden, I'm afraid, was mostly an afterthought.

Harris is a woman, she says, but she won't be the last.  That is how I heard it and how I wrote it.  To friends.  So many platitudes, I couldn't count.  Then came the Biden Bark.  Worst acceptance speech anyone has ever made, or so I wrote.  I made my friends angry, I think.  I interrupted the orgasm.  Nobody wants to hear they are fucking a hooker.

Joe should have plagiarized again.  But we all know who Joe has to please now.  He's as deep into political debt as Trump is to the Russians.  I've already taken to the streets.  Too soon?

Some people did think this was funny.  I mean, I AM a clever boy.

And so, like all my friends in their golden years, I watched it this morning.

And so now, we all click our heels together three times and head back to Kansas.  The grand hallucination is ending, we hope.  As I've said, however, Trump was merely the chancre.  It has disappeared, but the syphilis still rages.  If it isn't cured, we will go blind.  Our noses will fall off and we will go mad.  That's the way that disease works.  So what do we do if the infected won't take the medicine?  They won't wear masks.  They don't want vaccines.  It is almost as if they like the disease.

I don't think the U.S. is about to become any more civil.  I believe the opposite.  The Woke will be buzzing around like drunken wasps while moderate democrats are congratulating one another with cocktails.  Meanwhile, the drunken beer brawlers will be singing anti-abortion hymns with their new Latino brothers while the rich kick back with their adrenochrome dreams.

Yes, yes, I'm a cynical sonofabitch.  I should be singing Kumbaya with the rest of you, but. . . fuck it.  I have always been a bit of a heretic.