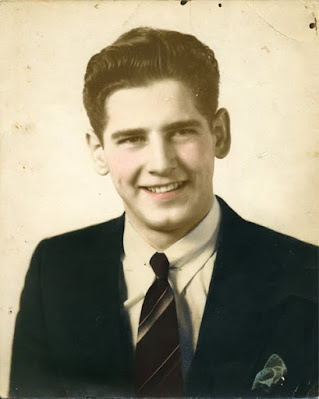 This is my father's high school graduation picture.  He looks about 30, I think.  I never knew him to look like this, of course.  He was 36 when I was born.  I'm not sure what I see when I look at the photo.  I study it, his features, looking for clues to a mystery I don't understand.  He hadn't been to the war yet.  He hadn't been married.  I wonder if he had ever had a sexual encounter.  I don't wonder very long, of course, as such a thing is distasteful.  You don't want to think about the sex life of your mother and father.  But I don't even know if he had had girlfriends.  Surely he had, but I never asked him.  I know some things about his childhood, but not in detail.  He lived in a house in Dayton, Ohio that his baby sister later bought and raised her family in.  I stayed there several times.  But his father was a gangster of some sort and got into trouble with a gang boss, a bootlegger, whose girlfriend he was diddling.  Men came to the apartment one day and threw him out of a several story high window.  He landed on his head.  He was taken to the hospital and never left.  I don't know how long he stayed there before he died.  It was not something the family talked about above whispers.  From what I gathered, he stayed voluntarily.  He could have left, I heard, but he was ashamed.  He wouldn't talk.  I'll never know the truth of it.

My father's mother re-married, which means either that his father died or that they were divorced.  I think I will try to find out.  His mother married a man named Calvin who nobody thought much of.  I think he might have been a mean drinker, but again, I know little.  What I know is that my father spent his later childhood on a farm.

Apparently, he was a strong kid and performed certain feats of strength that people would come to watch.  I heard that he would sit a family on a tractor and lift the rear end of it.  Seems crazy, but it was during the depression.  Any entertainment, I guess.  He told me he hung a gunny sack full of dirt from a high beam in the barn for a punching bag.  He would set it swinging in its large arc and then stop it with a punch.  His older brother who had moved away came to visit when he was punching on it one day.  He saw dad stop the bag and wanted to try it.

Harry tried.  He broke his wrist.

My father was the quarterback of his high school football team.  He was written up in his yearbook.  I try to picture it, the small pads, the thin leather helmet without a face guard, the spiked leather football boots.

My father was a lefty.  I grew up catching those reverse spirals.  But he could do most things with either hand.  Schools dissuaded children from being left handed.  My father said they would not let him use his left hand in school.  Odd, but I cannot remember which hand he wrote with.  I believe it was with his right.

My father got married and had a child who died a crib death.  He had another, a son he named after himself.  He was drafted into WWII.  He served on a ship in the Pacific as a Machinist's Mate.  He said that he went out on shore leave with his buddies and drank for the first time.  He woke up in the hoosegow.  He said he didn't remember it, but he was charged with beating up a shore policeman.  He was going to be discharged, he said, but the ship came under attack and it was all hands on deck.  After that, he says, they dropped the charges.

He claimed that he was the Fleet Boxing Champion, but I have no evidence of that.

When the war was over and he came back home and his wife divorced him.  Trixie was her name.  He had it tattooed on his shoulder inside a blue and red heart.  He said he was drunk when he did that, too.  Trixie was a hot number, I think, and a little bit crazy.  I have one picture of her somewhere.  My father's namesake is the source of most of my knowledge of her.

My father's sister married a divorcee who had a son.  He was a rough guy from all accounts, though when I knew him, he was an old whiskey drinking cigarette smoking mess, the Tire Recap King of Dayton.  After the navy and after his divorce, my father went to work for him.  He was at the time a boxing promoter.  My father worked as a trainer for the local boys brought in to fight ranked fighters.  He was there to keep them going for as many rounds as he could.  There were no upsets.  My uncle went bust when he hired Jack Dempsey to referee a fight.  It cost him a lot of money.  The night of the fight there was a big blizzard and nobody showed up.  And that was the end of the fight game for him.

My father went to school to become a tool and dye maker.  At night, he was a bouncer in a bar.

I have heard a hundred stories from the family about my father's ability to fight.  My father told me that when he got hit, he literally saw red.  He became enraged, I guess.  I'm sure that left surprised people, but he said he was able to knock people out with his right jab.  He taught me to fight, so of course, I fought as a lefty.  I, too, could throw a mean right jab.  Of course.  My left?  Useless.  And when I get hit, I never see red.  I get tired and want to shit my pants and sleep.

But those are things I know.  My father married my mother when he was 32.  My familiarity with his story begins there.

I look at that photo and wonder many things.  He looks like a sweet boy.  He was a very good father and a very sweet man.  He never had to act tough.  He just was.  He was, and remained a crowd favorite.  He liked to make people laugh.

When he was near the end of his life, I asked him what advice he had for his son.  He said, simply, "You should do what you want."

As I've often quoted Faulkner, whether he actually said it or not; "The problem with most people is they don't know what they want."

It is, in many respects, the hardest thing.