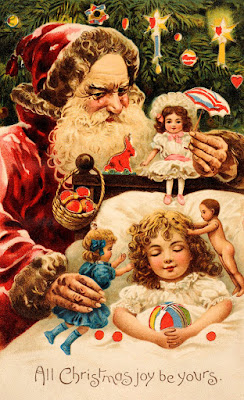 O.K.  Nothing creepy about that.

I just "ran" home in front of the impending storm.  I was sitting outside smoking the end of last night's cigar and drinking the more expensive scotch I bought myself for Christmas when I decided to take a walk and see the Christmas Eve lights.  I walked further than I intended to an old friend's house, The Twins.  We spoke for a minute and one of them said, "You'd better get home.  That's the edge of the storm there."  Just then I got hit by a few big drops of rain.  I walked faster than I usually walk, a version that belongs in the "Museum of Silly Walks" all the way home.  I made it just in time.  The wind is gusting and sirens are already sounding.  I hope Santa takes care.

I went out to climb stairs today.  I do an outside stairwell near the exercise course I have done for thirty years.  Nobody is ever there.  But when I began, there was a bum sleeping on the middle landing.  He was dead asleep on a light blanket, and beside him lay an iPhone.  WTF?  I thought about telling him to leave. I walked up and down the stairwell a few times sure I would catch his Covid.  Then I thought again.  Jesus.  It was Christmas Eve and this fellow had it worse than I, and here I was ready to give him the bum's rush.  I'm an asshole, I thought, and it is true.  There was another staircase on the other side of the highway, so I walked over and did my exercises there.

I am an asshole whiner, but I catch myself from time to time,.

I lost a girl last Christmas.  I lost a cat today.  She did not show up for breakfast or for lunch though her boyfriend was here for both,  I worry that something has gotten her.  I worry that she is gone.  She has begun to trust me more, but she has never loved me.  There is a wild look in her eye that will never let her get that close.  She could have been a domestic cat, but she chose to live a wilder life.  When I think of her gone, I think of that wild look in her eye.  Then I think of Ili.  The look was much the same.  I think she was the opposite of the cat.  She loved me but never trusted me.

This is the first Christmas Eve since 1990 that I have not met up with the group of orphans and miscreants on the Boulevard.  It would be crazy, I think, to get Covid now after sequestering for a year only to die a month before getting the vaccine.  I've decided that I will redouble my efforts to stay safe until I get inoculated.  I can't wait to sleep in a hotel again.

I went to my mother's tonight to have some champagne and to exchange gifts.  I realized that I do not really like champagne.  Perhaps if I were drinking Cristal. . . but I doubt it.  There is too much sugar for me, or so it seems.  I like the "slap on the back" more than "a mist before the eyes."  You'll recognize those lines if you have watched "The Philadelphia Story" more than once.

When I got home, I made a dinner of ribeye, baked potato, and sautéed spinach.  So-so.  Now it is getting toward bedtime.  I may watch "A Very Murray Christmas" first, but we shall see.

It has been a horrible year for everyone.  I'm hoping to live again soon.  We all are.  I know this is more like a form letter than real writing, but it will take me a bit to get back into form.  And so, to all of you. . . I wish you the best Christmas possible.  And thus, goodnight.