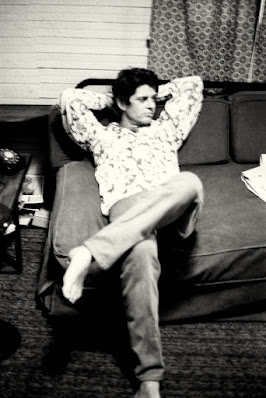 Here's the boy genius--grown up.  No, not me, but my half brother.  He was the spawn of my father's first marriage. . . to Trixie.  Now I swear to God, I am not making that up.  She had another name that I won't record here (because just now I can't remember it), but whenever anyone in the family referred to her (which was rarely), she was Trixie.

My half brother was a genius.  When he was still a kid, they had him on some television show with other kid geniuses.  It was a family legend.  He was twelve years older than I, so I wasn't around for that.  But yea, he was renowned.

His childhood was a tragedy, from what I've gleaned from parlor talk and information passed in low tones.  He lived with his mother, and I know my father paid child support for I've found receipts in the box of old papers I've only recently perused.  He may have been molested by a step-father or mother's boyfriend.  He came to live with us for a brief period, but not long.  I was too young to remember it.  I met him later when I was in my early teens.  He came to visit with his wife when he was in the military.  He was accepted to many colleges when he graduated high school and and chose to go to the Naval Academy in Annapolis.  After he had been there a year, he hated it, got his girlfriend pregnant, and got kicked out.  He went to UNC in Chapel Hill for awhile, but eventually quit and joined the navy.  Ironic, right?  Whatever.

He had a photographic memory and read some electrical engineering books, took a test, and was soon teaching electronics classes.  At least that is what I was told.  He got stationed in Taiwan and lived off base.  He had a big wooden sailboat and was enjoying a very bohemian life.  After twelve years, he was kicked out of the navy.  He was living in Ohio in a trailer with his wife and three kids when I drove up to see him my senior year of high school.  Well, I saw him, too, in addition to the rest of my father's family.  It was complicated.  While I was there, my cousin's wife got a crush on me which pissed off my aunt quite badly.  My cousin didn't seem to like it much, either.  I was out of my element all around.  They were all a much harder and harsher bunch than I.

Not long after that, my father was in a head on car crash that put him in the hospital intensive care for a long while and then a regular room for a while longer.  My half brother came down for a bit when that happened, and I got to know him a bit.  He was a vegetarian

I didn't see my half-brother again until I was in college.  I had an operation that laid me up for about three months, and during that time--Fisher had just beaten the Russian to become world champ--I bought one of the first chess computers and a ton of chess books--openings, middle games, and end games.  When my father brought my halfsy to see me, he saw the chess board and asked me if I wanted to play.  I beat him fairly quickly which startled the genius and my father both.

A few years later, he moved in next door to my father with his new girlfriend.  He had left his wife and family for the babysitter.  He got a job fiberglassing boats.  The girlfriend was not a good girl, apparently, and after getting a job as a go-go dancer, she disappeared.  My half-brother somehow found her and brought her home.  I was at the university at the time, so I wasn't privy to much, but I knew that the babysitter was playing my pops like a cheap fiddle.  She got pregnant and the happy couple moved into a trailer in a nearby town.  My memory of all this is hazy.  I am not sure when they left, but I was out of college by then.  Pops gave them my old Chevy and they moved to some briar patch in the hills of Kentucky.  My father told me later that my half-brother had driven the car off the side of a mountain and had totaled it.

The next and last time I saw him was when my father died.  He came down for the funeral and the reading of the will.  I don't think he got what he wanted.

I never saw him again.