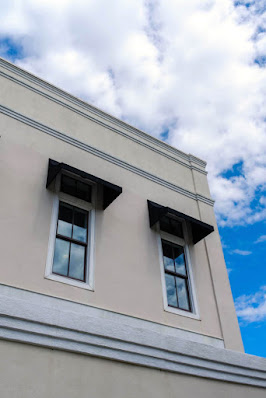 Mr. Fixit has finished working inside the house for now.  Almost.  Yes, it is like that.  But he will not be here this morning nor for the rest of the weekend.  I could have slept in, of course, but I woke early. . . of course.  I am sleepy and will surely go back to bed after I write this, so there is that.  I have been trying to put the house back together again, but the place had gotten so invisible to me as things do over time, I don't even remember where many things go.  That is disturbing.  Many things will not go back anywhere.  How in the hell had I managed to cram so much stuff into such a small place?  I must manage everything this morning, though, for the wrecking crew is coming.  Tonight, it will be possible to sleep in my own bedroom again.  Well. . . they are all my bedrooms.  I should say my usual bedroom.

I have found some comfort in sleeping in the small bed in the smaller room, however.  There is something cozy about it.  Sometime in the distant past, while living alone, I used to change beds if I couldn't sleep.  I'd get out of my big king sized bed and go into the other room.  That often worked.  The option will exist again.

Yesterday, Mr. Fixit made some repairs to the surfaces of the tub and sink in the guest bathroom.  When I moved in in 1996, all the surfaces were 1980's baby blue.  Rather than going to the expense of replacing the tub (we were over our head with the mortgage at that time), we had it resurfaced.  The wrecking crew has managed to damage those surfaces.  Mr. Fixit had me buy some epoxy spray paint that he thought to use on the cabinet drawers he was making.  That turned out to be a bad idea, but the smell of the epoxy reminded me that it was the very thing that was used to re-coat the tub.  I asked Mr. Fixit about it, and he said yes.  Then he decided he would make the repair.  It seems to have worked.

I have forgotten my original point in telling that story.  If it comes back to me. . . wait--oh, yea!  I had to clean out the cabinets in the bathroom because the fumes from the paint are terrible.  Last night, I went through the contents.  It is like a treasure hunt.  I found three sets of king sized sheets that have been missing for years.  I guess Ili put them there and forgot because we kept buying more.  The sheets are of the highest thread count and expensive.  I was both pleased and flummoxed.  I realize I don't know much about any of the drawers and storage shelves in the house.  Everywhere I look, there is a new revelation.

There were a lot of place mats in that pile, too.  They are going to the Salvation Army today.

I had a doctor's appointment yesterday.  I am on antibiotics for the next month.  That seems inordinately long, but I guess it is unavoidable.  If they don't work, I will be in for a surgery that is difficult.  The first thing I did when I got out of the office was Google "alcohol and antibiotics."  It seems that the idea that alcohol impacts the effectiveness of the drug is a myth.  What it does is exacerbates the potential harmful side effects.  Well, I thought. . . there's some good news.  I know what you are thinking, but I don't mean that I am going to power drink my way through them.  It means, however, that the occasional drink with a friend will not prevent me from getting the benefits from the drug.  Otherwise, though, I will curtail my intake.  It's time for recreational drugs and herbal teas.  What could say Christmas better than that?

If I only had a source.  I should have made the request from the doctor, I guess.

"Uh, hey man, like, I'm not supposed to drink with these, right?  Like a month is a really long time.  Could I get a prescription for some, uh, Seconal, maybe, or some phenobarbital, or something, you know, to calm me down?  I get really like depressed. . . well, you know, not like clinically, but man. . . I just need something doc, you know?"

I have more and different doctor's appointments next week, just in time for Christmas.

My mother's birthday is Sunday.  She will be 89.  I am going to the French bakery off the Boulevard today to see if they can make something for her.  I will get her flowers.  I am buying her a combined b-day/Christmas present as I am not very good at picking presents which was always a problem plaguing Ili and me.  I am getting my mother a new iMac.  Cool, right?  I think the one she has now is about ten years old.  Hell, that comes out to about $100/year.  I'm hoping we can do the same math again with this one.

Gift giving used to be so much easier when people had less and there was less in the world to have.  An orange and a piece of ribbon, maybe.  A nice doily or a little toy soldier.  Now. . . it all seems idiotic to me.

Last night, I started watching some eye candy, or brain candy, or cotton candy called "Emily in Paris."  It was just what I needed.  Pretty, meaningless tripe.  I watched four half hour episodes before bed.  There is no way to save them for later.  They are like eating bonbons (whatever those are).  I'll probably have watched them all by the end of the weekend.  I would recommend the show if you need something really silly to watch.  And I DO mean silly.

The morning light is breaking and I see the cats on the deck waiting to be fed.  It is forecast to be a beautiful day.  I am hoping to enjoy it in a Time of Covid kind of way.

Today's photo--I just figured you were hankering for another portrait of a building, so. . . voila!