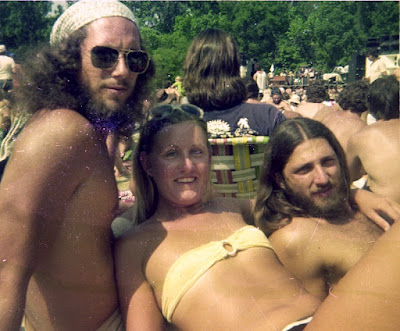 My life is not my own just now.  I use the cliche because my life is a cliche.  Just now.  I am reduced to the most common things.  I have had to blow off friends, have had to skip seeing my mother, have not been an adequate correspondent.  I am a house slave and a prisoner of the vast medical system.  But the interior of the house should be finished today.  The bathroom is complete again.  After Mr. Fixit left for the day, I opened a porter and began the emotionally arduous task of repopulating the new drawers and cabinets with the contents of the old drawers and cabinets.  I am a man stuck in time.  I wanted to put everything back into drawers as they were, as they have been for twenty-plus years.  But it was impossible.  There were things I hadn't touched in nearly as long which I--reluctantly--threw away.  There were things I had no idea about, Ili's potions and lotions and unguents.  There were essential oils I'd never seen before but which I remember being applied to me occasionally before bed.  There were many containers of skin treatments that I will begin to use.  Special soaps and shampoos.  There was a secret life living in the old vanity that I have now discovered.

I was slow and sad.  I held each object in my hand, turned it over, read the label, took a sip of porter and went on.  I was flooded with memories and some remorse.  There was a profound lonesomeness to it all.

And so I weeped a bit, but only internally.  The old bathroom is gone and all the years of living here with that hideous old tub and the cheap vanity--gone.  It is just the repetition of movement, the invocation of automatic memories. . . .

After all was thrown or put away, I stripped down and entered the new shower.  O.K.  That part was strange and delightful.  Yes, I like my new shower.  I'll allow myself that.

I have been trying to get the house ready for the wrecking/cleaning crew.  That has required many decisions, too.  I have too much cluttering stuff.  I hold onto things that are uncommon or weird.  A whale's tooth I bought in the London market along with the old brass compass.  Two opium pipes, one bought in a Shanghai market, the other a gift.  Blow guns and hand made bows and arrows from the South American tribal forests.  An impala horn.  Far too many vases and baskets, some made by Quakers, some made of vegetable fibers by natives of those Amazonian jungles.  A woven pith helmet.  Two long scrimshaw somethings that I have no idea the purpose of and many scrimshaw trays.  Oh, shit, the list is too long, more than I care to write.  I am a little boy possessive of his toys.  Seriously, I have not even scratched the surface.  But some things, mostly yuppy Pottery Barn/Restoration Hardware sort of things, have gotten the pitch.