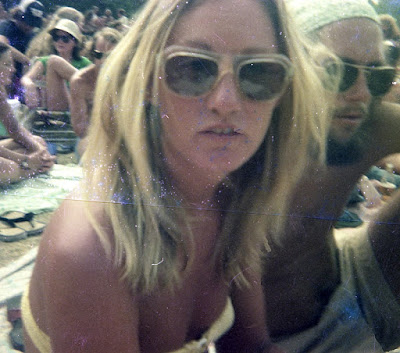 I found a bunch of negatives stuck together in a box.  They must have melted a bit.  The emulsions were stuck to one another.  I peeled them apart none too carefully as they were small negatives, not even 35mm, obviously from one of the old point and shoot cameras that people used to use.  Surprisingly, I found a carrier for them in a drawer full of scanning paraphernalia, and I put them in the Epson V700 scanner, not the best thing for scanning negatives, but what I had.  And then. . . there were some faded, flawed images of the past.  Some were from Christmas 1974.  Some were from an outdoors music event at the university I attended.  There was my girlfriend's family and her brother in his high school graduation robe.  Obviously, it took my girlfriend a long time to shoot a roll of film.  I am pretty sure I hadn't seen most of the photographs before.  Why did I have them?  It is a small but deep mystery.

There were a good number of my college roommate and his girlfriend who was also the roommate of my girlfriend.  We were having great fun growing up in a whirlwind of fantastical events.  The girls had a tenth floor dorm room in the first co-ed dorm at the college.  The view of the campus and the town was staggering.  My roommate and I had a "modular home" in a "modular home park" on the outskirts of town.  We rotated roommates and bedrooms.  I don't remember ever being bored.  Nope.  Never.

I have so much shit to go through.  I think I've saved more things than anyone I know.  I've been asking people about old letters, how many they have, etc.  Many people have thrown their letters away.  I find that unbelievable.  I find notes and letters everywhere.  Yesterday, I came upon a goodbye apology written by Ili some years ago that I don't remember.  It was in a drawer with an old Havana cigar, some pipe cleaners, and an envelope full of hundred dollar bills.  I know, right?  I have an organizational handicap, I'm afraid.  My life is filled with bits of beautiful flotsam and jetsam.  On the one hand, I can't readily put my hands on anything.  On the other, I am continually surprised.

And I am thrilled by my life.  Absolutely.  I have probably made too many bad decisions, but I've ended up in some wonderful places.  With better decisions, you'd likely know my name.  As it stands, hardly anyone does, and to hide my misadventures, I live in a cave.  I remain anonymous to protect the not so innocent.

The upshot, though, is that I sound self-aggrandizing.  I must, you see, for I am the only one to tell the tale.  And it is as stunning a tale as any I know.  But it comes out thusly.

The photos and the letters bring so much of it, long or partially forgotten, back.  And so, owning my own media outlet (or at least renting it from Google), I have a place for telling it.  So reader--beware.

Did I tell you about me?