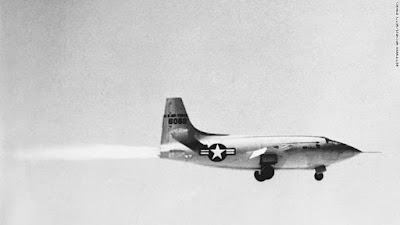 This was the first airplane to break the sound barrier.  It made Chuck Yeager famous.  But look at it.  It is the stuff of childhood dreams if you are of a certain age.  It is your childhood in a nutshell.  It explains why old people think differently than young people.  Their fantasies were of a different shape, had a different figure.  The world was ripe for invention, for exploration.  There was still a sense of the "exotic."  Swamp monsters and Nessie the Loch Ness Monster were not completely outside the realm of possibility.  You could still run down to the end of the street and find something scary in the woods just beyond.

"Still."  That is a loaded word.  I should not use it.  It carries some hierarchical message in its use.  I must find a better, more neutral word.

I'm not romanticizing the past.  I'm not saying it was better.  I'm just saying that character was shaped in different ways.  But those were the bad old days.  They need to be corrected and washed from memory.

"Just."  I've always been suspicious of people who use that word.  It is a gaslighting word.  It seeks to disguise some other fact.

I shouldn't use the word "always" either.

But. . . there is this (link).  This "news" story reads like a novel.  I am enamored because it invokes something "exotic" to those who grew up when there were places and place names and people considered so.  The present is as dangerously corrupt and tawdry as the past.  It must be cleansed, I say.  One People, One World.

This is not at all what I intended to write this morning, but I don't have the energy to write what I had hoped to and considered writing.  Tomorrow, maybe, or the next day.  I am tired beyond my own comprehension.  Just worn out.  But the bathroom should be completed by Wednesday and the Wrecking Crew comes on Friday, so for the first time in about a month, I'll be able to sleep in my own bed.

Still, I am a jittery bunch of paranoia about everything from my house to my health.  I am as negative as I can be.  When Mr. Fixit is finished working around here, I will be terribly broke, but maybe I can begin to work on having some positive thoughts and healthful activities again.

Until then, I am a catatonic mess.  For fun, I've been watching three hour long Yale University lectures on "Lolita."  What?  You don't think that would be fun?  Well, there are more in the Yale series, and I am going to watch them until the new season of "Goliath" is released, anyway.  Or maybe "Ozark."  As far as I know, there is nothing out there on the horizon.

Yes, maybe tomorrow I can write the story I intended.  The morning is cold here, in the low forties, and the sky is a luminous pale blue.  I have another doctor's appointment in a little while, and then the rest of the day with Mr. Fixit.

Another day in paradise.