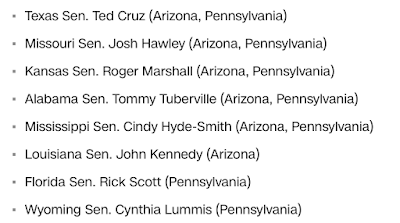 My circle of friends shrank greatly last night.  You do not really see people until times of crisis I guess.  The people I have come to disdain are not the ones you might think, either.  It wasn't necessarily republicans or enablers of the president.  I would have to renounce my own mother if it were that simple.  No, for me, last night revealed some deep-seated insincerity in many I've considered principled thinkers, people I imagined to be intellectually sincere in their approach to matters of liberty and freedom.

What I found last night is how many of the people I know only wish to to be clever.  It was as if last night was a sort of drinking game.

I know I pissed people off, and it bothered me all night.  I certainly didn't sleep well.  If I haven't been kicked off the island, so to speak, I have certainly left voluntarily.

It doesn't make me happy.  It is heartbreaking, truly.

However, there are people I feel more strongly affectionate for than ever. 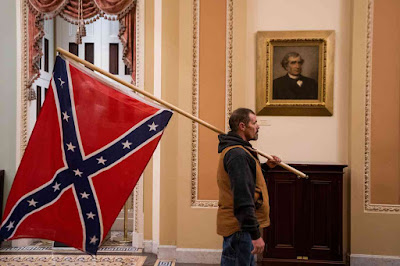 You've seen the photos already.  Still. . . .
Even Fox News turned on the president last night.  For awhile, at least.  The attack on democracy was shocking to them until they regained their balance.  Then, it was a shame that all the good that President Trump had done for our country had to end like this.  Hannity said that 99% of the protestors were decent people exercising their constitutional rights, that there just a few bad apples in the crowd that made everyone else look bad.
A few bad apples.
Somehow, a few bad apples were able to storm the U.S. Capitol.  Unarmed hillbilly methheads.  As has been pointed out many times already, our defense budget is huge, but it was overwhelmed by a few bad apples. 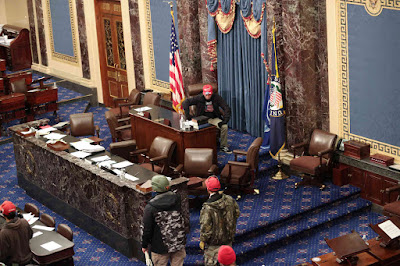 Watching officials elected to defend the constitution run away to duck and cover as hillbillies trashed the Senate floor sickened me.  All the tough talk, all the falling back on their laurels for having served in the military, all the shouting and finger jabbing, none of them were willing to stand their ground.  I'm sorry.  I know most of you will say that caution or whatever is the better part of valor, but I can't agree with this.  Not if you've been out chest thumping like some MMA star whenever the cameras are on.
Yesterday late afternoon, as this was about to take place, with insurrectionists gathered in front of the Capitol, the image of that having been broadcast all day, I visited my mother.  Like any reasonable person, she was in disbelief.  When I left her house, I stopped by the grocery store on my way home.  In the parking lot, I walked by a group of bull necks in MAGA hats backslapping, heads jerking, bodies flopping in wild movements like they were headed to watch some pay-per-view fight when they got home.  I mean , they were rowdier than people normally are.  As I walked by, they gave me the fuck you arrogant stare daring me to say something.  I can't, you know.  I can't fight any more.  I am most likely not able to survive a beating.  But my blood was boiling and I would not break with their challenging gaze.  Fuck you, I wanted to say, and I am ashamed that I didn't.  Maybe it was that shame that colored the rest of my evening and influenced the way I reacted to my "friends."  In the light of morning, I think it certainly could be.
But this shit didn't end yesterday, I fear.  It is not some national problem that will disappear with Trump.  These motherfuckers are emboldened.  They got away with it, and it was fun.
This shit is going to go local.  For people whose only power has been physical, this political game is just that.  It's a game.  They don't understand governments.  They don't have a broad knowledge of history.  They know what they read online in the Trump media.  Emboldened ignorance is like a drug.  Insurrection is like some redneck Burning Man.  You don't need to be able to read or write.  Just go, man, go!
And there are plenty of people who will allow them to do what they do.
More people died of Covid in the United States yesterday than ever before.  The virus is so unchecked, has spread so widely in the U.S., that it has had great opportunities for mutation.  Who is to blame for that?  Try talking to one of the hillbilly methheads about that.  You'd be better off talking about Big Foot.
I am sad today.  I can barely move.  2021 seems worse than 2020 so far.  I have fewer friends and everything seems far away.  Nothing seems real.
Posted by cafe selavy at 9:07 AM