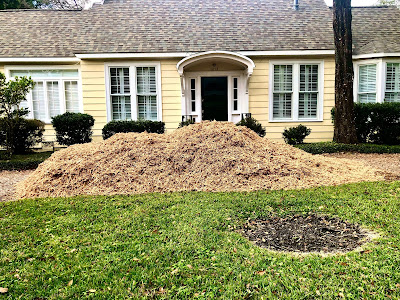 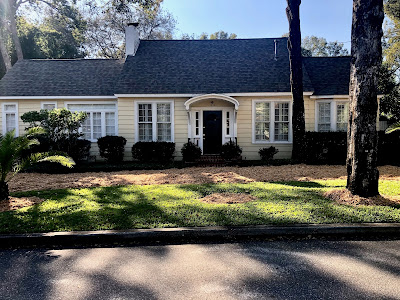 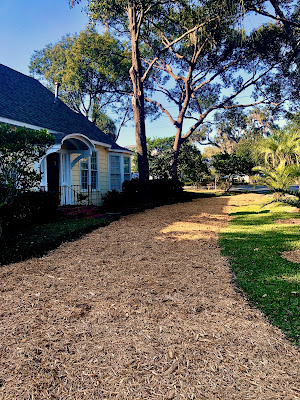 And then. . . .
I did it.  I did it all by myself.  I was loathe to begin, I must say.  I've become a lazy, good for nothing bugger in the past year, but there was nobody else who was going to do it, so I pumped the tires on the wheelbarrow, grabbed my thick leather gloves, the pitchfork, and a rake, and got myself to work.  The size of the pile was daunting and the day was cool and cloudy, but soon I had warmed up.  As I was stripping off my top layer, the sun suddenly popped out and for the rest of the day, the sky was clear and blue.  There is nothing that delights my neighbors more than seeing me working, I believe, and as they did their lazy Saturday morning walks, they had to let me know.  I think the women were eyeing me.  I mean, I felt pretty sexy in my thick leather gloves and my white v-neck t-shirt, muscles flexing as I hoisted the pitchfork.
God only knows what I truly looked like to them.
I had half the driveway done in an hour.  But I have to admit, the car-wrecked side of my body was barking and my lower back, already painful, was starting to suffer.
No matter.  A glass of water and I was back at it.
I did have some help along the way.  A hawk landed in the yard.  In a bed of jasmine, actually, and he had something trapped in his talons.  I stood and watch him pick at whatever he had, then he flew up into the tree above him.  I went over to see what he had been about, but there was nothing.  Later on, he flew down into the new mulch.
"Hey, pretty bird, whatcha got there.  You sure are something."
That's how I talk to wild animals.  They seem to like it.  What it had was a lizard.  When it finished eating it, it sat on the ground and watched me as I watched it back.  Then, with a giant sweep of its wings, it flew close by me at eye level.  It was being a little arrogant, I think, showing me what's what.  It landed back on the tree limb where it could watch me toil for a while longer.  It was nice to have some company.
I was running out of gas as I moved the last few loads to the far end of the property, filling in the beds around the Ligustrum trees and then in the flower garden where the hummingbirds have been feeding for awhile.  Then, almost magically, there was no more mulch to heave and haul.  It was like coming out of a dream.
"You old cripple.  You did it.  You da man."
I wanted a beer, but I didn't have any, so I poured a glass of wine.  That is not the thing you want, however, after throwing mulch all day.  It did me no good at all.
I didn't have much time to rest however.  I had to shower and get over to my mother's house so I could take her for her vaccination.
She was waiting in the driveway for me when I got there.  She is always early and I am always late.  She was pacing back and forth so I gassed it then hit the brakes and the horn at the same time to scare her.  No I didn't.  You don't believe I'd do that to my 89 year old mother, do you?
She put on her mask and got into the car, so I put mine on, too.  Then she put on a plastic shield.
"Nice.  Do you want a helmet?"
She took off the shield.
"I think that's a good decision.  I was afraid we were going to get pulled over by the insanity police."
The first thing I did was drive her by my newly pressure washed and freshly mulched home.  She had not been here since March. I took her in to see my very expensive new bathroom.
"Nice," she said quickly glancing around.  She was anxious to get going.  She wanted her vaccine.
When we got to the Convention Center, the line was very long, cars snaking and looping as far as you could see.  Stop, start, creep forward, stop.  We sat in line for about two hours.  I kept looking at the gas gauge.  It would be horrible to run out of gas here in line, I thought with no small trepidation.  Why didn't I fill the gas tank before we came?  Hell, I wondered, why do I always need to turn the most mundane things into adventures?
Four hours later, I was back home.  My mother had her first vaccine, and the house was mulched.  I was hungry, but I didn't have much food in the house.  But I had a great idea.  I poured the day's first scotch.
This morning is the coldest of the year.  Rather than feeling like a cowboy, I am reflecting on Thoreau and self-reliance.  It is good to do the things you can, I think, even when you don't want to.  To wit, I am thinking about painting my fence today.  I keep putting it off. . . like for years, but if it warms up a bit, who knows.  I may be feeling a little jiggy.  It could happen. 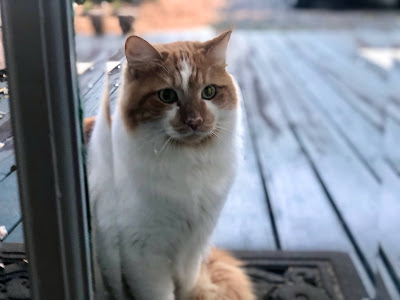 The cats have been fed, but they are taking turns looking in through the bottom pain of my kitchen door.  This is Oscar, the neighbor's cat.  He spends about half his day stalking things in my yard--squirrels, butterflies, hummingbirds, snakes.  I tell him to quit it but he doesn't listen.  Oscar the Horrible.  He is, however, a very beautiful cat.
The sun is shining now in a most wonderfully blue sky.  Let's see what it can bring.
Posted by cafe selavy at 8:33 AM