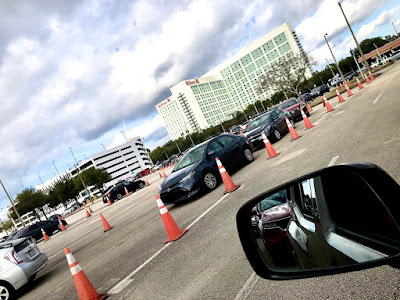 Cool as somebody else's cucumber, I headed out to get my first Moderna vaccine injection yesterday.  This was the day I'd been waiting for.  Just a few weeks after getting the shot, I figured, my life could be a long, long string of Motel 6s.  I didn't know where I was going for the vaccine really, and I hadn't taken any time to figure it out beforehand, but I had the map app to guide me.  I had an appointment time, a window of two hours, so I saw no reason to get there early.  I waited until the last minute to go.

My college roommate had the same appointment time, but he was about half an hour further away than I.  I started getting texts from both him and his wife early in the morning.  His wife was concerned about what we would do if we needed to pee.

"Are you taking a pee jar?"

"Maybe we should just get some adult diapers?"

I thought their concern hilarious.

With the guidance of the app, I got there easily and on time.  But where was the vaccine site?  I was at a huge county convention center whose property stretched for miles.  I pulled into a parking lot and asked the attendant.  She told me it was not at the convention center but at the parking lot of the Hilton.  There had been no mention of the Hilton in any of my communications, but. . . .

I drove about a mile and saw a sign above the roadway that said something about the Covid site.  It was one of those signs that gives you bits of the message at a time, and since I was driving, I didn't get to see it all before I passed.  Ahead, though, I saw a sign that said Covid.  Ah. . . I'd found it.  I drove up to the long line of cars and took my place.  I tried to call my buddy to tell him that the site was not at the convention center but was located in the Hilton parking lot.

He didn't answer.  Twice I called.  Then I called his wife.  She said he wouldn't answer the phone while he was driving, but she would text him to let him know.

The line was still for long moments before it moved a few car lengths.  Again and again.  When I rounded a turn, I could see that the line was at least a mile long.  There were cones set up in the parking lot so that you had to snake your way through it like a line at an amusement park.  As I passed cars, I noticed that there were a lot of young people.  I really didn't see anyone over 65.  I texted my friends.  How could this be?  Maybe they were front line workers or something.  Weird.  At least I was getting the vaccine, I told myself.  Just chill.

Suddenly, I had to pee really badly.

I'd been in line about an hour and forty-five minutes when my buddy texted, "Done!"  What?

"How in the hell did you get ahead of me.  I'm still snaking around the parking lot."

"What are you doing a the Hilton.  Are you sure you are in the right line?  It sounds like you are in line for the testing."

A cold chill ran through me.  I couldn't believe it.  I rolled down my window and asked a guy in line in one of the snaking lanes, "Hey, man. . . is this the line for the vaccine?"

I started banging on my steering wheel in frustration and rage.  I looked at the clock.  I had about ten minutes left in my time window for getting the vaccine. I still had about a quarter mile to go to get to the front of the line, and there was no way to pass.  I was panicked.  I opened my door and got out of the car and walked to see if I could find a way out.  It would take some luck and balls, but what other choice did I have.  I started moving cones so that I could get my car out of line.  I drove and knocked cones over as I drove across traffic slowly weaving my way between car bumpers.  After a few minutes of this, I got to a road that led up to the parking garage.  I took that and got to a barrier, but I managed to drive around it.  I was out and back on the street.  But where was I to go?  I could only make a right hand turn, and this took me to an empty divided road with a big median.  I hit the gas and flew.  I was going the wrong way, I could tell, off property.  I hit the brakes and jumped the curb, drove across the median, and charged my way back.  Fuck, fuck, fuck, fuck, fuck.  I got to that road sign again that I had seen earlier and stopped my car mid highway to read the whole thing.  Yep.  O.K.  Fuck.  I followed the arrows.

When I got to the correct place, I realized I had driven right by it on my way to the Hilton.  I followed the cones that led me down into a parking garage.  There was no one in front of me, no one behind.  I was the only car.  I still had a couple minutes left in my allotted time.  I pulled up to the the first stop and a lady walked to the car window.

"Is this where I get the vaccine?"

"My god, I've been sitting in the testing line for two hours.  I didn't think I'd make it."

It took all of two minutes.  I was asked to wait in the parking lot for fifteen to make sure I didn't have a reaction.  While I was sitting there, my college roommate pulled up.

Just as I was writing this, there was a tapping on the front door.  I got up and peaked out.  It was the mulch delivery.  I'd completely forgotten about it.  I ordered it earlier in the week, but I never got a call back on the delivery time.  I went out and showed him where to dump it.  Holy shit.  It made a pile four feet high and about twenty feet long.  I've ordered way too much, it seems.

I looked at it with no little dismay.  I am really going to miss Ili this weekend.  The two of us spread the mulch in the driveway and the beds in half a day.  It was astonishing how quickly we zipped through it.  I would load up the wheelbarrow with mulch and carry it down to wherever and dump it.  She would rake it out into an even covering while I got the next batch.  We were very efficient.

Today, I will have to fill the wheelbarrow, tote and dump it, then rake.  I don't think I'll finish in a day.  My ribs are already barking.  It is dreadfully cold and getting colder.  The sky is grey.  There will be joy in this task alone.  Nope.

When I pick up my mother tonight to take her for her vaccine, I will drive her by to see the newly mulched driveway in front of the newly pressure washed house.  She hasn't been here for many, many months.  Then I will take her to the right place to get her vaccine.  At least I now know where to go.

I'm an idiot.  No wonder the cars were filled with people not old enough to get the vaccine.  I just looked on in wonder and rancor without being jolted into a realization.